World News // 3 years ago
Without vote, U.S. allows Security Council to pass resolution against Israeli settlements
The U.N. Security Council on Friday passed the first Middle East peace resolution in nearly a decade -- with the United States conspicuously absent in the vote. 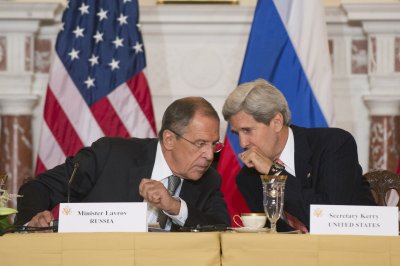 World News // 3 years ago
New Syria peace talks between U.S., Russia set for this weekend
Officials said Wednesday a new round of talks between the United States and Russia for peace in Syria will take place in Switzerland on Saturday.

World News // 3 years ago
Audio tape shows Kerry frustrated about Syria as Aleppo nears collapse
As forces continue to tangle in Syria, President Obama's chief diplomat appears to be increasingly frustrated at the lack of progress in achieving peace.

World News // 3 years ago
5 dead, 400 arrested in riots for food in Venezuela
At least three people are dead and 400 have been arrested in protests and looting over food shortages, Venezuelan officials said Wednesday.

World News // 4 years ago
Kerry: 'Provisional agreement' could lead to Syria cease-fire
Talks between the U.S. and Russia announced Sunday could lead to a temporary truce within days in the Syrian civil war.

World News // 4 years ago
Iran shows video of Navy sailor apologizing for intrusion; U.S. says event 'clearly staged'
One of 10 Navy sailors briefly detained in Iran for drifting too far in the Persian Gulf appeared on Iranian TV Wednesday, apologizing for the intrusion.

John Forbes Kerry (born December 11, 1943) is the senior United States Senator from Massachusetts, and is chairman of the Senate Foreign Relations Committee. He was the presidential nominee of the Democratic Party in the 2004 presidential election, but lost by 34 electoral votes to former President George W. Bush. Senator Kerry is a decorated Vietnam veteran, and was a spokesman for Vietnam Veterans Against the War when he returned home from service. Before entering the Senate, he served as an Assistant District Attorney and Lieutenant Governor of Massachusetts under Michael Dukakis, who was nominated for President by the Democrats in 1988.

Kerry is the child of Richard J. Kerry (1915–2000), a Foreign Service Officer and an attorney for the Bureau of United Nations Affairs, and Rosemary Forbes Kerry (1913–2002), a World War II nurse and member of the wealthy Scottish-American Forbes family. He has three siblings: two sisters, Diana (born in 1947) and Margerie (aka Peggy; born in 1941) and a brother, Cameron (born in 1950), Cameron Kerry was picked to be Barack Obama's general counsel of the Commerce Department.

His immediate family members were reportedly observant Roman Catholics. As a child, Kerry served as an altar boy. Although the extended family enjoyed a great fortune, Kerry's parents themselves were upper-middle class; a wealthy great aunt paid for Kerry to attend elite schools in Europe and New England. Kerry spent his summers at the Forbes family estate in Brittany, and there, he enjoyed a more opulent lifestyle than he had previously known in Massachusetts. While living in the U.S., Kerry spent several summers at the Forbes family's estates on Naushon Island off Cape Cod.

FULL ARTICLE AT WIKIPEDIA.ORG
This article is licensed under the GNU Free Documentation License.
It uses material from the Wikipedia article "John F. Kerry."
Back to Article
/