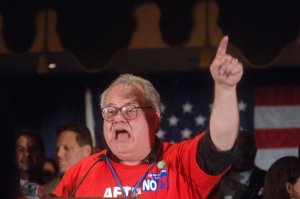 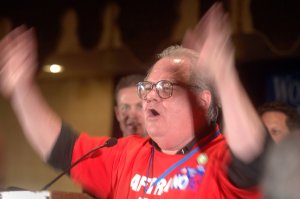 Movies // 6 years ago
Julianne Nicholson calls 'Black Mass' showdown with Johnny Depp 'thrilling,' 'terrifying and wonderful'
Actress Julianne Nicholson says an excellent script is usually what entices her to sign up for a film, television or stage project.

I think spirits are higher today than they have been during the last week, because people know that there may be a resolution in sight tomorrow morning

This contract represents a victory for solidarity, strategy and good sense

John Connolly (born May 31, 1968, Dublin) is an Irish writer who is best known for his series of novels starring private detective Charlie Parker.

His first novel, Every Dead Thing, was met with critical acclaim; it was nominated for the Bram Stoker Award for Best First Novel and went on to win the 2000 Shamus Award for Best First Private Eye Novel (he is the first author outside of the US to have won the award). Connolly's debut introduced readers to the anti-hero Charlie Parker, a former police officer hunting the killer of his wife and daughter. Connolly has since written a further 5 books in the popular Parker series and a non-Parker thriller, as well as venturing outside of the crime genre with the publication of first, an anthology of ghost stories and later, a novel about a young boy's coming-of-age journey through a fantasy realm during World War II England. Several film adaptations of his works are currently in development; the earliest to appear to audiences will be partially based on the short story "The New Daughter", and stars Kevin Costner and Ivana Baquero, previously seen in the acclaimed film Pan's Labyrinth. Connolly is also known to tour extensively to promote the launch of his books. In 2007, Connolly made book-store appearances in Ireland, United Kingdom, United States, Australia, New Zealand, Hong Kong and Taiwan to promote The Unquiet.

Before becoming a full-time novelist, Connolly had worked as a journalist, a barman, a local government official, a waiter and a gofer at Harrods department store in London. After graduating with a B.A. in English from Trinity College, Dublin and a M.A. in Journalism from Dublin City University, he spent five years working as a freelance journalist for The Irish Times newspaper. He quickly became frustrated with the profession, and began to write Every Dead Thing in his spare time. Connolly continues to contribute articles to the paper, most notable of which have been a series of interviews with other established authors.

FULL ARTICLE AT WIKIPEDIA.ORG
This article is licensed under the GNU Free Documentation License.
It uses material from the Wikipedia article "John Connolly."