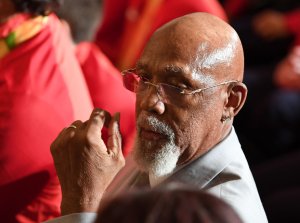 Top News // 11 months ago
The Almanac
On June 5, 2004, Ronald Reagan, the 40th U.S. president, died at his Los Angeles home at the age of 93 of complications from Alzheimer's disease.

Science News // 1 year ago
Chinook salmon that migrate in spring, fall more alike than thought
Traditionally, spring-run and fall-run Chinook salmon have been classified as two separate subspecies, or ecotypes, but new genetic analysis suggests the two groups are much more similar than they are different.

Sports News // 1 year ago
Alliance of athletes calls for end of ban on protests at Olympics
A group of track and field athletes on Friday urged the International Olympic Committee to wipe away a rule that bars political protests at the Olympic Games.

Top News // 2 years ago
The Almanac
On June 5, 2004, Ronald Reagan, the 40th U.S. president, died at his Los Angeles home at the age of 93 of complications from Alzheimer's disease.

John Wesley Carlos (born June 5, 1945 in Harlem, New York) is an African American former track and field athlete and professional football player. He was the bronze-medal winner in the 200 meters at the 1968 Summer Olympics and his black power salute on the podium with Tommie Smith caused much political controversy. He went on to equal the world record in the 100 yard dash and beat the 200 meters world record (although the latter achievement was never ratified). After his track career, he enjoyed brief stints in the National Football League and Canadian Football League but retired due to injury.

He became involved with the United States Olympic Committee and helped to organise the 1984 Summer Olympics. Following this he became a track coach at Palm Springs High School. He was inducted into the USA Track & Field Hall of Fame in 2003.

Born in Harlem, New York, John Carlos was a gifted high school athlete and outstanding student who went on to study at East Texas State University on a full track-and-field scholarship. His victories in the 100 and 200-meter dash and as a member of the 4x400-meter relay helped lead ETSU to the 1967 Lone Star Conference Championship. After his first year, Carlos matriculated to San Jose State University where he was trained by future National Track & Field Hall of Fame coach, Lloyd (Bud) Winter.

FULL ARTICLE AT WIKIPEDIA.ORG
This article is licensed under the GNU Free Documentation License.
It uses material from the Wikipedia article "John Carlos."