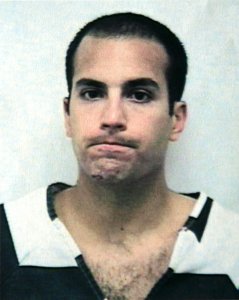 U.S. News // 3 years ago
Trump set to nominate 10 federal court judges
President Donald Trump is expected to nominate 10 judges to federal court positions on Monday, a senior White House official said.
World News // 7 years ago
Missing British girl Lorna Vickerage found safe in London
Lorna Vickerage, 14, was found Friday in central London after disappearing from her home in the company of a family friend, 35, authorities said.
Odd News // 8 years ago
Jockstrip: The world as we know it.
Ala. man jailed 3 days for sagging pants ... Premature baby born at more than 12 pounds ... Fla. city bans nightclubs, skating rinks ... Boy, 9, rescued from chimney ... The world as we know it from UPI.
Odd News // 8 years ago
Ala. man jailed 3 days for sagging pants
An Alabama judge, offended by a 20-year-old defendant's low-slung blue jeans, sent him to jail for three days for contempt of court.
Science News // 1 decade ago
Study shows how insects breathe underwater
Hundreds of insect species spend much of their time underwater looking for food and U.S. scientists have determined how such insects continue to breathe.
Science News // 1 decade ago
MIT scientists solve long-standing puzzle
U.S. scientists have solved a puzzle concerning the interaction of mineral oil and detergent -- they just aren't sure if the knowledge is useful.
Science News // 1 decade ago
Study shows how tiny insects 'climb' slope
Massachusetts Institute of Technology scientists have discovered how some insects can rapidly climb steep, slippery slopes without moving their limbs.
Science News // 1 decade ago
New robot mimics insect water-walkers
Scientists are attempting to unlock the secrets of how water-striding insects skim aquatic surfaces and in the process have created a robotic equivalent named Robostrider.
Odd News // 1 decade ago
Rock News Two: The week in pop
"To Whom it May Concern," the debut album from Lisa Marie Presley, entered the Billboard album charts at No. 5, selling more than 140,000 copies in its first week and making it one of the year's highest debuts.
Odd News // 1 decade ago
Rock News: Music's high and low notes
Fabulous Thunderbirds singer and harmonica player Kim Wilson has his first studio album in six years, "Lookin' For Trouble," due out June 10 on M.C. Records, the label's first release under its new distribution deal with Minnesota-based Navarre Corp.

If you put a motor on it, it would be too heavy, so we used a spring-loaded pulley device hooked up to an elastic thread that runs the length of the body instead to drive the legs

It's clear the natural water striders is much more elegant, but these insects have been evolving in nature for millions of years, and our robot water striders evolved over a few weeks

It's something you see whenever you travel in, say, the Northeast, in Cape Cod. When I was in Japan last year, I saw them there, and I saw them in a pond in England yesterday

John Barnard Bush OBE CStJ JP (born Marlborough, Wiltshire, 1937) is the current Lord Lieutenant of the English county of Wiltshire, serving since 2004. He had previously been the county's High Sheriff.

Outside public service, Bush is a career farmer, owning a mixed farm at Heywood in West Wiltshire.

Bush served for many years as non-executive chairman of West Midland Farmers Association Ltd, a regional agricultural co-operative previously based in Melksham, Wiltshire. He oversaw its 1999 demutualization to become Countrywide Farmers plc, a farming, equestrian and rural supplies firm, which, as of 2004 when he retired from the post, had 11 000 farmer shareholders and an annual turnover of £150 million.

FULL ARTICLE AT WIKIPEDIA.ORG
This article is licensed under the GNU Free Documentation License.
It uses material from the Wikipedia article "John Bush."
Back to Article
/