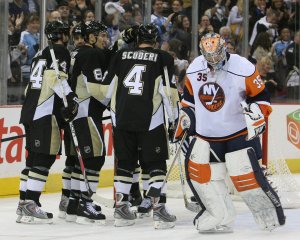 Joseph MacDonald (born February 7, 1980) is a Canadian professional ice hockey goaltender in the Detroit Red Wings organization who currently plays with the Grand Rapids Griffins of the American Hockey League (AHL). He has previously played for the Boston Bruins, New York Islanders, and the Toronto Maple Leafs. He plays in the butterfly style of goaltending.

MacDonald was born on February 7, 1980, in Pictou, Nova Scotia. His favorite television program growing up was Hockey Night in Canada.

MacDonald began his goaltending career in the Quebec Major Junior Hockey League for the 1997–98 season playing for the Halifax Mooseheads. In 17 games, he recorded only three wins, but continued to work on his style and play, impressing the coaching staff in the process. The Ontario Hockey League then came calling the following season and MacDonald began play for the Peterborough Petes as their starting goaltender. MacDonald thrived in his expanded role, finishing with a winning record and a lower goals against average. He remained the Pete's starting goaltender until the 2001–02 season when he joined the Toledo Storm after being noticed and signed up by the Detroit Red Wings scouting team.

FULL ARTICLE AT WIKIPEDIA.ORG
This article is licensed under the GNU Free Documentation License.
It uses material from the Wikipedia article "Joey MacDonald."
Back to Article
/