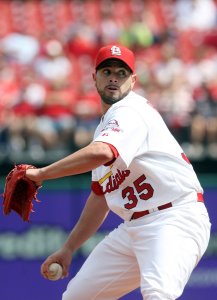 Joel Alberto Piñeiro (Spanish pronunciation: , English: /dʒoʊˈɛl pɪnˈjɛəroʊ/; born September 25, 1978) is a Puerto Rican Major League Baseball starting pitcher for the Los Angeles Angels of Anaheim. He is 6'1" tall and weighs 200 pounds. He is right-handed and made his major league debut on August 8, 2000.

Piñeiro began the 2004 baseball season as a promising starting pitcher for the Seattle Mariners. The previous two years he started in 60 games, won a total of 30 games, and produced a 3.52 ERA. 2004 though, turned into a dismal year with Piñeiro posting a 4.67 ERA and the first losing record of his career (6 wins – 11 loses). Piñeiro suffered another problem when he was placed on the disabled list July 27, 2004, with a sore elbow and subsequently missed the remainder of the season.

Piñeiro continued his struggles in 2005 and was optioned to Triple-A Tacoma on May 14, 2005. He returned to the majors and started in 30 total games; however he was unable to return to his previous form and posted a 5.62 ERA for the year.

FULL ARTICLE AT WIKIPEDIA.ORG
This article is licensed under the GNU Free Documentation License.
It uses material from the Wikipedia article "Joel Pineiro."
Back to Article
/