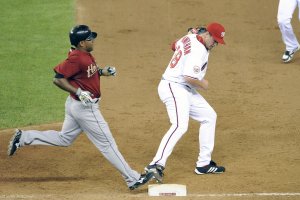 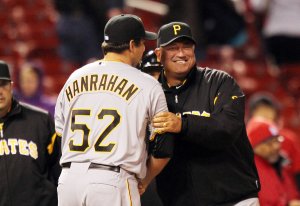 After graduating Norwalk High School in Norwalk, Iowa, he turned down a scholarship to play baseball at the University of Nebraska and entered the June 2000 Major League Baseball Draft. At that time, he was ranked as the 70th-best prospect in the nation by Baseball America. He was drafted in the second round (#57) and signed by the Los Angeles Dodgers.

In his first full season with Dodgers Triple-A affiliate, the Las Vegas 51s, Hanrahan went 7-7 with an Earned Run Average of 5.05 in 25 games. He ranked second on the club with 22 starts and third with 119.1 innings pitched. He batted .281 on the season and hit a home run on May 4 against Tucson and posted a 4.11 ERA at home and 6.39 mark on the road in the Pacific Coast League.

FULL ARTICLE AT WIKIPEDIA.ORG
This article is licensed under the GNU Free Documentation License.
It uses material from the Wikipedia article "Joel Hanrahan."
Back to Article
/