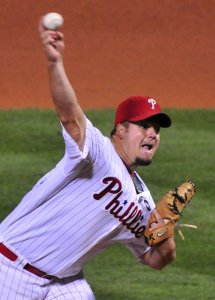 MLB // 2 years ago
Washington Nationals beat Arizona Diamondbacks but lose Stephen Strasburg to injury
The Washington Nationals hope their latest big win -- this over one of the National League's top starting pitchers -- doesn't somehow turn into a major loss.

MLB // 2 years ago
Washington Nationals get key out on Yoenis Cespedes in 7-4 win
If the Nationals end up cruising to the National League East title while leaving the Mets flailing for a lifeline in the wild-card derby, both teams may look back on the weekend.

MLB // 2 years ago
Joe Ross strikes out 12 as Washington Nationals beat Baltimore Orioles
WASHINGTON -- Having arrived back from the west coast earlier in the day, Washington manager Dusty Baker decided to give three of his everyday starters a night off on Thursday in a makeup game at Nationals Park.

MLB // 2 years ago
Bryce Harper's 2-run shot in ninth lifts Washington Nationals past Philadelphia Phillies
WASHINGTON -- Pete Mackanin laughed just a little bit when asked about the possibility of pitching around Bryce Harper with a runner on first and two outs in the bottom of the ninth inning and the score tied.

MLB // 2 years ago
Mike Leake, Stephen Piscotty power St. Louis Cardinals past Washington Nationals
Mike Leake had not won a game in Washington since his rookie year in 2010, when his manager with the Cincinnati Reds was Dusty Baker.

MLB // 2 years ago
Bryce Harper, Daniel Murphy power Washington Nationals past St. Louis Cardinals
WASHINGTON -- Manager Dusty Baker toyed with the Washington Nationals' batting lineup in the first eight games of the season, partly because of injuries and also to see who fits in the best spots.

The thing about being with the Oakland A's, you tend to be in rumors a lot

Joseph Matthew Blanton (born December 11, 1980, in Nashville, Tennessee) is a starting pitcher for the Philadelphia Phillies of Major League Baseball.

He graduated from Franklin-Simpson High School (Kentucky) in 1999. He pitched three seasons for the University of Kentucky. He posted a 13–12 record from 2000 to 2002, and led the Southeastern Conference with 133 strikeouts in his final season, finishing with a 4.59 ERA.

Blanton was selected by the Oakland Athletics with the New York Yankees' first round pick (24th overall) in the 2002 Major League Baseball Draft, acquired as compensation for the loss of free agent Jason Giambi. In 2003, while pitching for the Kane County Cougars and the Midland RockHounds, he ranked second in all of minor league baseball with a combined 174 strikeouts.

FULL ARTICLE AT WIKIPEDIA.ORG
This article is licensed under the GNU Free Documentation License.
It uses material from the Wikipedia article "Joe Blanton."
Back to Article
/