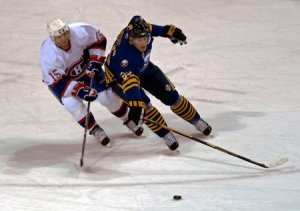 The St. Louis Blues selected Hecht in the second round, 49th overall, of the 1995 NHL Entry Draft from Adler Mannheim of the Deutsche Eishockey Liga (DEL). Hecht played two full seasons for the Blues, compiling 32 goals and 46 assists before being dealt, along with Marty Reasoner and Jan Horáček, to the Edmonton Oilers for Doug Weight and Michel Riesen on July 1, 2001.

After appearing in a full season with the Oilers, Hecht was traded to the Buffalo Sabres in exchange for the 31st and 36th picks in the 2002 NHL Entry Draft. As a Sabre, Hecht had his most successful NHL season, in terms of points scored, in 2006–2007 with 56 points (19 goals, 37 assists).

FULL ARTICLE AT WIKIPEDIA.ORG
This article is licensed under the GNU Free Documentation License.
It uses material from the Wikipedia article "Jochen Hecht."
Back to Article
/