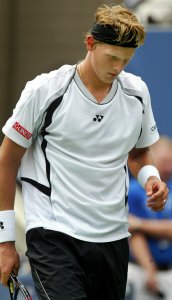 Johansson was born in Lund and currently lives in Södertälje, Sweden. His father, Leif Johansson, was also a tennis player and represented Sweden in the Davis Cup in the 1970s. He goes by the nickname "Pim Pim", which he has been called since he was a newborn. His elder brother pronounced Joachim as "Joapim" which later became "Pim Pim". In 2005, Swedish hurdler Jenny Kallur became his girlfriend but in August 2008 they separated. Lleyton Hewitt's sister, Jaslyn Hewitt, was his girlfriend for five years from 2000 to 2005. Since April 2009 he is engaged to Johanna Westerberg, a Swedish professional golfer on the Ladies European Tour, and they are expecting their first child.

He is not related to fellow Swedish tennis player Thomas Johansson.

FULL ARTICLE AT WIKIPEDIA.ORG
This article is licensed under the GNU Free Documentation License.
It uses material from the Wikipedia article "Joachim Johansson."
Back to Article
/