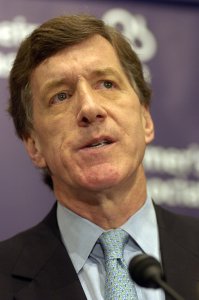 The inclusion of parity, tax extenders and the FDIC increases has caused me to reconsider my position

James Marvin "Jim" Ramstad (born May 6, 1946) is a United States politician from the state of Minnesota.

Ramstad was born in Jamestown, North Dakota, was educated at the University of Minnesota and the George Washington University Law School. He was an officer in the United States National Guard from 1968 to 1974. He also worked as a private practice attorney and as a legislative aide to the Minnesota House of Representatives.

FULL ARTICLE AT WIKIPEDIA.ORG
This article is licensed under the GNU Free Documentation License.
It uses material from the Wikipedia article "Jim Ramstad."
Back to Article
/