College Basketball // 2 years ago
Motivated Miami ready for upstart Loyola-Chicago
Miami may be going into the NCAA Tournament as the No. 6 seed in the South Region, but its first-round opponent seems to be getting the most love.

College Basketball // 3 years ago
NCAA: Michigan State drills Miami
TULSA, Okla. -- A year after being ousted in the first round of the NCAA Tournament, Michigan State made that a distant memory by routing Miami.

College Basketball // 3 years ago
Bruce Brown, Miami take down No. 10 Duke
CORAL GABLES, Fla. -- Miami guard Bruce Brown may only be a freshman, but he is quickly establishing himself as a "big game" player. 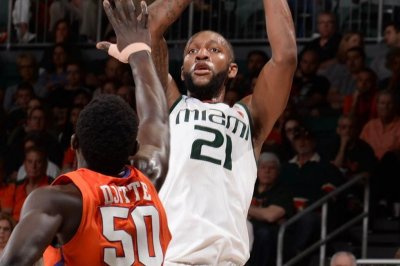 College Basketball // 3 years ago
Duke, Miami battle for position in ACC
With Wednesday's loss to Syracuse on a banked 3-pointer at the buzzer, Duke not only dropped two games behind leader North Carolina in the ACC.

College Basketball // 3 years ago
Miami takes down No. 18 Virginia
CHARLOTTESVILLE, Va. -- Knowing the challenge Miami would face against the nation's top defensive team, coach Jim Larranaga prefaced to his team before Monday night's matchup with Virginia that the first team to score 50 points would win the game.

College Basketball // 3 years ago
No. 4 Louisville rallies past Miami
LOUISVILLE -- Starting point guard Quentin Snider's return to the lineup was just in time to help No. 4 Louisville escape against Miami 71-66 at the KFC Yum! Center on Saturday.

James Larranaga (born October 2, 1949 in the Bronx, New York) is an American college basketball coach and the head coach of the George Mason Patriots men's basketball team. He became a media darling during the Patriots' improbable run to the Final Four of the 2006 NCAA tournament.

Growing up in the Bronx, one of six children, Larranaga attended Archbishop Molloy High School in Queens, NY, where he starred on the basketball varsity under coach Jack Curran, graduating in 1967. He went on to play basketball at Providence College, He was the basketball team captain as a senior, 1970–71, leading Providence College to a 20–8 record and a NIT appearance. He graduated as the school’s fifth all-time leading scorer with 1,258 points and was the team’s top scorer as a sophomore and junior, being named New England’s Division I Sophomore of the Year in 1969. (Larranaga's time at Providence was recognized with his induction into the Providence College Hall of Fame in 1991.) He graduated from Providence in 1971 with an economics degree, and was selected in the sixth round of the 1971 NBA Draft by the Detroit Pistons. He never sought an NBA career, opting instead to go into coaching.

Immediately after graduating from Providence, he took a job as an assistant to Terry Holland at Davidson College, also serving as the freshman team coach. In his five years under Holland, Davidson won three regular-season Southern Conference titles and reached the NIT once, and he also amassed a 47–12 record as freshman coach. In 1976, he moved to Belgium in order to serve as player-coach for a professional club, but only stayed there for one season.

FULL ARTICLE AT WIKIPEDIA.ORG
This article is licensed under the GNU Free Documentation License.
It uses material from the Wikipedia article "Jim Larranaga."
Back to Article
/