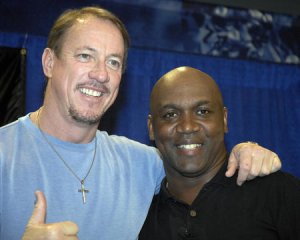 NFL // 2 years ago
Jim Kelly: Andrew Luck retirement gives nephew chance with Colts
Pro Football Hall of Fame quarterback Jim Kelly said the "plus side" of Andrew Luck's retirement is that it gives his nephew Chad Kelly a chance to show the Indianapolis Colts "what he can do."

NFL // 3 years ago
Patriots do just enough to defeat Bills, 25-6
Tom Brady amused himself on Instagram last week, warning #billsmafia that he was coming for them and all but guaranteeing another Patriots' win.

NFL // 3 years ago
Broncos release backup QB Chad Kelly after arrest
The Denver Broncos released Chad Kelly on Wednesday, one day after the quarterback was arrested on suspicion of first-degree criminal trespass.

Music phones and Bluetooth are at the top of many holiday wish lists this year and with our popular sliding design, renowned ease of use and the most innovative features, Slider Remix is the perfect choice

We know that wireless users are clamoring for simplicity and many just want to know they can make calls, send text messages and take pictures easily

It has been written that toughness is my trademark, but the toughest person I have ever seen is my son Hunter

It has been written that toughness is my trademark, but the toughest person I have ever seen is my son Hunter

Many people called me the leader of the Bills, but Marv Levy was the real leader

James Edward Kelly (born February 14, 1960 in Pittsburgh, Pennsylvania) is a former American football quarterback in the NFL for the Buffalo Bills and the USFL's Houston Gamblers.

Kelly was drafted in the 1983 NFL Draft, rated just behind John Elway on at least one NFL draft list. Employing the K-Gun offense known for its hurry up shotgun formations and used by later teams like Peyton Manning's Indianapolis Colts and leading one of the great NFL scoring juggernauts in the Buffalo Bills, Kelly led the Bills to four consecutive Super Bowls in 1990, 1991, 1992, and 1993, though the Bills lost all four of them. In 2002, in his first year of eligibility, he was inducted into the Pro Football Hall of Fame.

FULL ARTICLE AT WIKIPEDIA.ORG
This article is licensed under the GNU Free Documentation License.
It uses material from the Wikipedia article "Jim Kelly."