MLB // 1 year ago
Angels again turn to minors for help against A's
Having dipped into the minor leagues for four new players Friday, the Los Angeles Angels plan to do so again Saturday.

MLB // 2 years ago
Bird, Trout on display when Yankees, Angels tangle
The easy decision for New York Yankees manager Aaron Boone will be activating Greg Bird and figuring out where to pencil the first baseman into the lineup.

NFL // 2 years ago
Lovato: Eagles held fake walkthrough in case Pats spied
Philadelphia Eagles long snapper Rick Lovato said that the team conducted what amounted to a fake walkthrough session prior to Super Bowl LII in the event that the New England Patriots were watching.

NFL // 2 years ago
Spagnuolo: Patriots stole signals in Super Bowl XXXIX
Steve Spagnuolo may not be involved in Super Bowl LII, but he levied a shot against one of the teams that will play in Minneapolis on Sunday.

Sports News // 2 years ago
Freddie Freeman propels Atlanta Arizona Braves past Diamondbacks
ATLANTA -- A seven-week stint on the disabled list didn't cool off Freddie Freeman's bat and neither did the All-Star break. 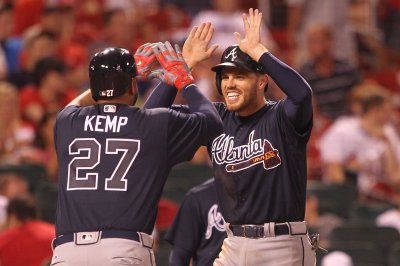 Sports News // 2 years ago
Freddie Freeman reaches milestone in Atlanta Braves victory
WASHINGTON -- Freddie Freeman went 2-for-5, including his 1,000th career hit, and drove in two runs, as the Atlanta Braves beat the Washington Nationals 5-2 on Thursday in a game that was delayed 3 hours, 5 minutes by the threat of inclement weather that never materialized.

MLB // 2 years ago
Kurt Suzuki's homer in 12th gives Atlanta Braves sweep of Oakland A's
Coming back to play at the Oakland Coliseum, his baseball home for over six seasons, is always special for Atlanta Braves catcher Kurt Suzuki.

We hate to do it but we really have no choice

Kerry's swift action in beginning this process to select a running mate indicates what kind of a president the nation can expect -- decisive, focused and ready to lead

I have the greatest respect for John Kerry as a friend and as a national leader, and know that he will make an outstanding president

Johnson was born in Johnson City, New York. He was raised in Endicott, New York and graduated from Union Endicott High School in 2001 along with Chris Riley, when he was signed by Orioles scout Jim Howard. His nickname is "J.J."

He began the 2008 season in the Triple-A Norfolk Tides starting rotation, but was called up to the Orioles on April 12. Pitching middle and late relief, he ran up 18 consecutive scoreless innings before giving up a 10th inning run to Oakland on May 5.

FULL ARTICLE AT WIKIPEDIA.ORG
This article is licensed under the GNU Free Documentation License.
It uses material from the Wikipedia article "Jim Johnson."
Back to Article
/