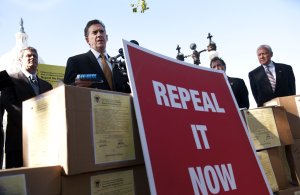 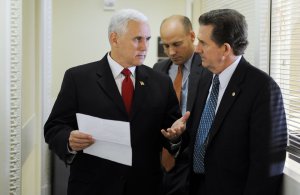 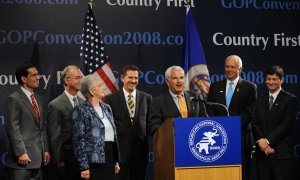 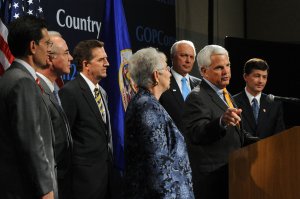 Top News // 4 years ago
On This Day: Ship explosion near Halifax kills more than 1,900
On Dec. 6, 1917, more than 1,900 people died in an explosion when a Belgian ship and a French munitions vessel collided in the harbor at Halifax, Nova Scotia.

Top News // 5 years ago
The Almanac
On Dec. 6, 1973, Gerald Ford was confirmed as vice president under Richard Nixon, replacing Spiro Agnew, who had resigned in the face of income tax-evasion charges.
U.S. News // 7 years ago
Election 2014: Republicans wrest control of Senate in big wins
Republicans won most of the competitive races in the 2014 midterm elections, taking control of the U.S. Senate and a number of governorships.
U.S. News // 8 years ago
CPAC: Gingrich, Bachmann go after Hillary Clinton
Newt Gingrich and U.S. Rep. Michele Bachmann took aim Saturday at Hillary Clinton on the final day of the Conservative Political Action Conference.
U.S. News // 8 years ago
DeMint: Republicans were forced into passing debt ceiling bill
Heritage Foundation President and former Sen. Jim DeMint said Sunday that many conservatives feel like they are not well represented in Congress.
U.S. News // 8 years ago
The Issue: Budget deal moves to Senate; new era of compromise?
Washington witnessed a Christmas miracle last week: House adoption of a budget compromise worked out by House-Senate negotiators after Speaker John Boehner bluntly told recalcitrant members of his caucus to toe the line or lose all credibility.
Odd News // 8 years ago
The almanac
UPI Almanac for Friday, Dec. 6, 2013.
U.S. News // 8 years ago
The Issue: Obamacare defunding a losing issue
A funny thing happened as Republicans and Democrats lurched to a compromise to end the partial government shutdown and avert threats of a U.S. default: The outcry against healthcare reform was muted.
U.S. News // 8 years ago
Politics 2014: Deficit, debt ceiling debate not for faint of heart
The clock counting down to some potentially nasty fiscal realities has been ticking for a while but will sound a little louder and more urgent once Congress returns to Washington next week.
U.S. News // 8 years ago
DeMint seeks to buck up GOP on shutdown strategy
A former Tea Party leader in the U.S. Senate said Republicans unwilling to shut down the government rather than fund healthcare reform "need to be replaced."

The deal Congress just passed over conservative objections has already had its obvious effect, the loss of America's credibility around the world

I don't think there's any room to negotiate on raising taxes, particularly on smaller businesses

There certainly will be disruption, but this is not a deadline we should rush and make a bad deal

James Warren "Jim" DeMint (born September 2, 1951) is the junior U.S. Senator from South Carolina, serving since 2005. He is a member of the Republican Party and a leader in the Tea Party movement. He previously served as the U.S. Representative for South Carolina's 4th congressional district from 1999 to 2005.

DeMint was born in Greenville, South Carolina, one of four children. His parents, Betty W. (née Rawlings) and Thomas Eugene DeMint, divorced when he was five years old. Following the divorce, Betty DeMint operated a dance studio out of the family's home.

DeMint was educated at Christ Church Episcopal School and Wade Hampton High School in Greenville. DeMint played drums for a cover band called Salt & Pepper. He received a bachelor's degree from the University of Tennessee and an MBA from Clemson University.

FULL ARTICLE AT WIKIPEDIA.ORG
This article is licensed under the GNU Free Documentation License.
It uses material from the Wikipedia article "Jim DeMint."