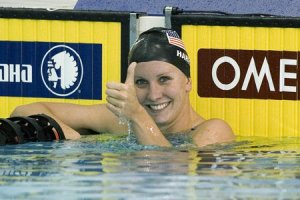 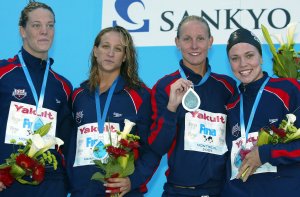 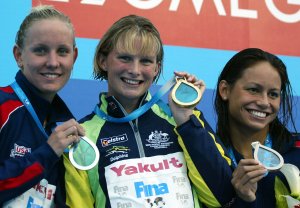 Jessica Hardy (born March 12, 1987) is an American swimmer from Long Beach, California. After setting the world record in the 100 m breaststroke as a high school senior, she competed for two years at the University of California, Berkeley, where she was a four-time NCAA Champion and met her longtime boyfriend Dominik Meichtry, a Swiss swimmer. She gave up her eligibility and turned professional in 2007, and returned to train with her age group coach Dave Salo for Trojan Swim Club out of the University of Southern California. She currently holds the 50 m breaststroke (short course) world record after winning the 2008 FINA Short Course World Championships final in a time of 29.58 seconds on April 12, 2008.

On July 23, 2008 it was reported that Jessica Hardy had tested positive for clenbuterol. Her attorney confirmed on July 24th that Hardy's "A" and "B" samples from a test administered on July 4th were positive for clenbuterol, a banned stimulant. It has been noted that the positive test was sandwiched by two negative tests, each within a few days of the positive result. Due to the short half-life of clenbuterol, her negative test results do not hold any credence when used as a defense.

On August 1, 2008, the USADA released a statement stating "The U.S. Anti-Doping Agency (USADA) announced today that U.S. Swimmer, Jessica Hardy, of Long Beach, CA, tested positive for the prohibited substance clenbuterol at the U.S. Olympic Trials on July 4, 2008, and has agreed to withdraw from the 2008 United States Olympic Team in the best interests of the team."

FULL ARTICLE AT WIKIPEDIA.ORG
This article is licensed under the GNU Free Documentation License.
It uses material from the Wikipedia article "Jessica Hardy."
Back to Article
/