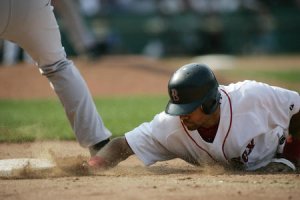 Jesse Allen Litsch (born March 9, 1985, in Pinellas Park, Florida) is an American pitcher for the Toronto Blue Jays of Major League Baseball. He is 6 ft 1 in tall and weighs 225 pounds.

On May 15, 2007, Litsch made his Major League debut with the Blue Jays, filling in for the injured Roy Halladay. Over 8.2 innings (the most innings pitched by any Blue Jay in his debut), Litsch allowed only 4 hits, with 2 walks and 1 run while recording an amazing 21 of his 26 outs via groundouts. Litsch became the first Jays pitcher to win his debut since Gustavo Chacin beat the New York Yankees on September 20, 2004. As a result of his performance, Litsch earned three more starts with the Jays. He was demoted back to AA after posting a 0–3 record with a 19.62 ERA in those three starts.

FULL ARTICLE AT WIKIPEDIA.ORG
This article is licensed under the GNU Free Documentation License.
It uses material from the Wikipedia article "Jesse Litsch."