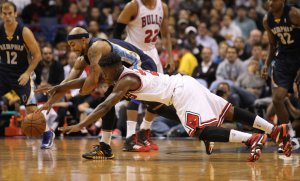 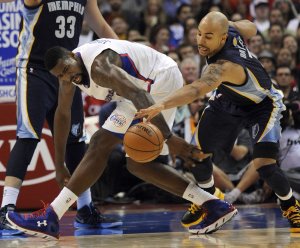 NBA // 3 years ago
Timberwolves get ready for Nets, move on from Jimmy Butler
Sometime on Monday, the Jimmy Butler saga is expected to officially reach a conclusion for the Minnesota Timberwolves.

NBA // 3 years ago
76ers look to extend win streak against Knicks
As if the Philadelphia 76ers needed to add any more fuel to their raging fire heading into their Wednesday night home matchup with the Knicks.

Jerryd Bayless (born August 20, 1988 in Phoenix, Arizona) is an American basketball player for the Toronto Raptors. He played a year of college basketball for the Arizona Wildcats after playing high school basketball at St. Mary's High School in Phoenix, where he scored a career high of 52 points in a loss to eventual state champions, Desert Mountain. He was selected 11th overall in the 2008 NBA Draft by the Indiana Pacers, and then traded to the Portland Trail Blazers along with Ike Diogu in exchange for the rights to Brandon Rush (13th pick), Jarrett Jack and Josh McRoberts. He was traded to the New Orleans Hornets for a first round pick on October 23, 2010, and to the Toronto Raptors on November 20, 2010.

In his freshman season at the University of Arizona, he averaged a team-high 19.7 points per game while picking up an average of 2.7 rebounds and 4.0 assists. His team finished the season with an 19–13 record (8–10 in the Pac-10), including a loss to West Virginia in the first round of the NCAA tournament. After the season, he decided to declare early for the 2008 NBA Draft.

In the 2008 NBA Draft, the Portland Trail Blazers acquired the rights to Bayless (the 11th pick) along with Ike Diogu from Indiana in exchange for the draft rights to 13th pick Brandon Rush along with Jarrett Jack and Josh McRoberts. The deal was completed on June 26, 2008, but was not announced until July 9, 2008. Blazers general manager Kevin Pritchard stated "Bayless will make our backcourt more athletic. He's a proven scorer and a tenacious competitor." On July 20, 2008 Jerryd Bayless was added to the USA Select Team. At the 2008 NBA Vegas Summer League, he earned the Most Valuable Player Award after leading the league in scoring at 29.8 points per game and leading the Trail Blazers to a record of 3 wins and 2 losses.

FULL ARTICLE AT WIKIPEDIA.ORG
This article is licensed under the GNU Free Documentation License.
It uses material from the Wikipedia article "Jerryd Bayless."