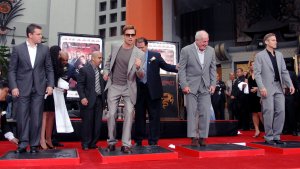 Top News // 4 years ago
The Almanac
On Sept. 26, 1991, four men and four women entered the huge, airtight greenhouse Biosphere II in Arizona. They remained inside for two years, emerging on this date in 1993.

Entertainment News // 5 years ago
HBO backtracks on decision to renew 'The Brink,' cancels show
HBO has announced the cancellation of comedy series 'The Brink' starring Tim Robbins and Jack Black, despite renewing it in July.

I'm trying to be very blase, but actually I'm very excited about this

We just thought it would be a real goof to take down all of New York like that at that time. The roller coaster ... and all the hotel

Weintraub was born in The Bronx, New York, the son of Rose Weintraub and a gem salesman father. After several years at MCA, he left and formed his own personal management company. In the 1960's, he also co-founded the vocal group The Doodletown Pipers. Among the acts that Weintraub managed at this time were Joey Bishop, The Four Seasons, and singer Jane Morgan. His relationship with Morgan went from professional to personal and the two were married in 1965.

Before turning to films, Weintraub's largest entertainment success was as the personal manager of singer and actor John Denver whom he signed in 1970. By 1975, Denver was the highest-selling male artist in the world. When John Denver ended his business relationship due to Weintraub's focus on other projects, Weintraub threw John out of his office and called John Denver a Nazi. John Denver would later write in his autobiography ".. I'd bend my principles to support something he wanted of me. And of course every time you bend your principles - whether because you don't want to worry about it, or because you're afraid to stand up for fear of what you might lose - you sell your soul to the devil".

FULL ARTICLE AT WIKIPEDIA.ORG
This article is licensed under the GNU Free Documentation License.
It uses material from the Wikipedia article "Jerry Weintraub."
Back to Article
/