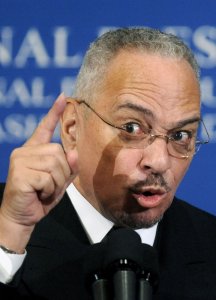 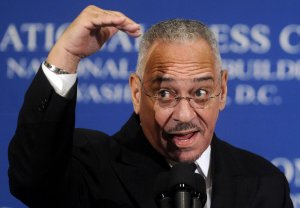 U.S. News // 5 years ago
Obama condemns 'inexcusable political rhetoric' against Muslim-Americans
President Obama encouraged tolerance, thanked all Muslim-Americans and condemned anti-Muslim rhetoric during a visit to a Baltimore mosque on Wednesday.
Odd News // 8 years ago
The almanac
UPI Almanac for Monday, March 18, 2013.
U.S. News // 9 years ago
Man unfit for trial in son's beheading
A Louisiana man is not mentally fit to stand trial for allegedly beheading his 7-year-old son, a panel of court-appointed doctors concluded.
U.S. News // 1 decade ago
Sanity to be determined in beheading case
A Louisiana man accused of decapitating his 7-year-old son will be examined by two sets of doctors to determine his sanity, a judge said.
U.S. News // 1 decade ago
Father accused of killing disabled son
A Louisiana man accused of killing and decapitating his disabled son has been assigned an attorney knowledgeable in death penalty cases.
Top News // 1 decade ago
Obama win would be first for Chicagoan
Observers say if Barack Obama wins in November, he will be the first person from Chicago, known for its gangsters and politics, to live in the White House.
Top News // 1 decade ago
Gingrich warns of likely election pitfalls
Former U.S. House Speaker Newt Gingrich said Sunday the Republican Party may lose the general election if it attacks Barack Obama's experience.
Top News // 1 decade ago
Priest: Clinton remarks brought threats
A Catholic priest who apologized last week for mocking presidential hopeful Hillary Clinton from a Chicago pulpit says he has received threats.
Top News // 1 decade ago
Obama resigns from Trinity church
U.S. presidential hopeful Barack Obama says his decision to resign his membership in the Trinity United Church of Christ in Chicago came with "some sadness."
Top News // 1 decade ago
Cardinal: Priest to stay out of politics
Chicago's cardinal Friday said the priest and Barack Obama supporter who derided Sen. Hillary Clinton won't "mention any candidate by name" from now on.

In light of the controversy surrounding statements made by you that have recently been publicized, the celebratory character of Northwestern's commencement would be affected by our conferring of this honorary degree

They are unfair accusations taken from sound bites, and that which is looped over and over again on certain channels

We bombed Hiroshima, we bombed Nagasaki, and we nuked far more than the thousands in New York and the Pentagon, and we never batted an eye

Jeremiah Alvesta Wright, Jr. (born September 22, 1941) is Pastor Emeritus of Trinity United Church of Christ (TUCC), a megachurch in Chicago exceeding 6,000 members. In early 2008, Wright retired after 36 years as the Senior Pastor of his congregation and no longer has daily responsibilities at the church.

Following retirement, Wright's beliefs and preaching were scrutinized when segments from his sermons were publicized in connection with the presidential campaign of Barack Obama, including his contention that the attacks of September 11, 2001 were proof that "America's chickens are coming home to roost" and "...not God Bless America. God damn America." Obama reacted to the Wright controversy in a speech entitled "A More Perfect Union."

Wright subsequently defended himself in a speech before the NAACP on April 27, 2008, in which he indicated that he was not "divisive" but "descriptive," and that the black church experience, like black culture, was "different" but not "deficient". After the election, Wright was again the center of controversy when he suggested on one occasion that "them Jews" were keeping him from reaching President Obama.

FULL ARTICLE AT WIKIPEDIA.ORG
This article is licensed under the GNU Free Documentation License.
It uses material from the Wikipedia article "Jeremiah Wright."
Back to Article
/