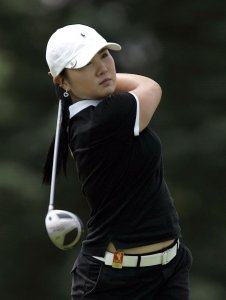 Jeong Jang (born 11 June 1980) is a South Korean professional golfer who plays on the U.S. based LPGA Tour. She is also a member of the LPGA of Korea Tour.

Jang was born in Daejeon, South Korea. She started playing golf at the age of thirteen. As a teenager she won the 1997 Korea Women's Open and the 1998 Korea Women's Amateur. She attended Joongbu University. After qualifying for the LPGA Tour at her first attempt, Jang had a successful rookie season in 2000 including a second place finish. She reached twelfth on the money list in 2004 and in that year had nine finishes in the top ten. In July 2005 she won for the first time, claiming the Women's British Open, which is one of the women's majors, by four shots. She claimed her second LPGA win in 2006 at the Wegmans LPGA.

LPGA major is shown in bold.

FULL ARTICLE AT WIKIPEDIA.ORG
This article is licensed under the GNU Free Documentation License.
It uses material from the Wikipedia article "Jeong Jang."
Back to Article
/