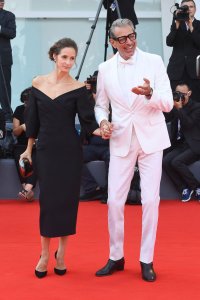 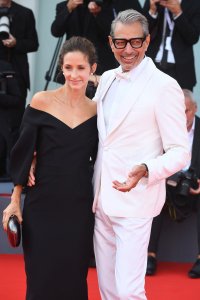 TV // 2 months ago
'CODA,' Will Smith, Jessica Chastain win top SAG Awards
The cast of "CODA" was named Best Ensemble in a Film at the Screen Actors Guild Awards ceremony at the Barker Hanger in Santa Monica, Calif., Sunday night.

After a take he said, 'That's very good, but on the next take, get a handful of dirt, put it in your mouth, and eat it,

Jeffrey Lynn "Jeff" Goldblum (born October 22, 1952) is an American actor. His career began in the mid-1970s and since then he has appeared in major box-office successes including Jurassic Park (two films), Independence Day, and The Fly. From 2009 to mid-2010 he starred as Detective Zach Nichols on the USA Network's crime drama series Law & Order: Criminal Intent.

Goldblum was born in the Pittsburgh suburb of West Homestead, Pennsylvania, the son of Shirley S. (née Temeles), a radio broadcaster who later ran a kitchen equipment and appliances sales firm, and Harold L. Goldblum, a medical doctor. He has a sister, Pamela and an older brother, Lee. Another older brother, Rick, died at age 23. His family is Jewish and belonged to an Orthodox synagogue; Goldblum's paternal grandfather, Josef Povartzik (who changed his surname to Goldblum), emigrated from Minsk, Russian Empire in 1911, and his maternal grandfather, Samuel Louis Temeles, from Złoczów, Austria–Hungary, in 1910.

Goldblum's parents were interested in show business. Goldblum moved to New York City at 17 to become an actor. Goldblum worked on the stage and studied acting at the renowned Neighborhood Playhouse under the guidance of acting coach Sanford Meisner. He made his Broadway debut in the Tony Award-winning musical Two Gentlemen of Verona. He is also an accomplished jazz pianist and declared that if he did not act, he would have become a professional musician. He made his film debut as a thug in the 1974 Charles Bronson film Death Wish. He briefly appeared as a protester in the TV movie Columbo A Case of Immunity (1975).

FULL ARTICLE AT WIKIPEDIA.ORG
This article is licensed under the GNU Free Documentation License.
It uses material from the Wikipedia article "Jeff Goldblum."