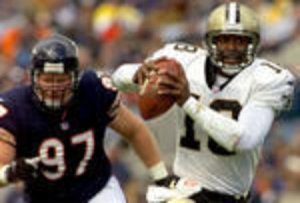 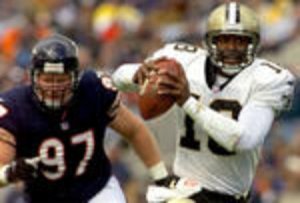 Jeff Bertrand Coleman Blake (born December 4, 1970 in Daytona Beach, Florida) is a retired American football quarterback who played in the National Football League. Although he finished his career with the Chicago Bears, he was formerly a quarterback for the New York Jets, Cincinnati Bengals, New Orleans Saints, Baltimore Ravens, Arizona Cardinals and Philadelphia Eagles. He was drafted in the sixth round of the 1992 NFL Draft by the Jets out of East Carolina University. His only Pro Bowl appearance came with the Bengals, when he was selected for the AFC team. In that contest, Blake threw a Pro Bowl record-long 92-yard touchdown pass to Yancey Thigpen.

Blake finished seventh in the 1991 Heisman Trophy voting, while leading East Carolina to an 11–1 record and the #9 ranking at season's end. He was inducted into the East Carolina Hall of Fame in 2007.

Blake's best seasons came with Cincinnati in the mid-to-late 1990s (when he was often referred to as "Shake-N-Blake" by local media and fans); he established great rapport with Bengal receivers Carl Pickens and Darnay Scott, helping the former vie for the receiving title in 1995.

FULL ARTICLE AT WIKIPEDIA.ORG
This article is licensed under the GNU Free Documentation License.
It uses material from the Wikipedia article "Jeff Blake."
Back to Article
/