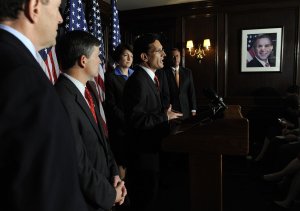 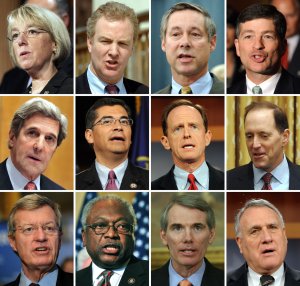 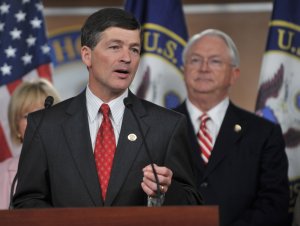 U.S. News // 5 years ago
Trump administration taking shape; Romney, Giuliani, Palin possible picks for key roles
So far, President-elect Trump has made appointments to six major administration positions, but there are many left to fill -- including several key slots.

Dick says everything has to be on the table, but under their plan, nothing is on the table

House Republicans put forth a proposal that would keep the government open. The Senate, frankly, has had plenty of time to consider it. They wanted more time, so we gave them two more weeks, but I hope that they would join us

Jeb Hensarling (born May 29, 1957) has been the Republican congressman representing Texas' 5th congressional district (map) in the United States House of Representatives since 2003.

Hensarling was born in Stephenville, the seat of Erath County, and grew up on the family farm in College Station. He graduated from Texas A&M University in 1979 with a bachelor's degree in economics. In 1982, he earned a Juris Doctor degree from the University of Texas at Austin. He is also an Eagle Scout.

Prior to serving in Congress, Hensarling was State Director for Texas Senator Phil Gramm from 1985 until 1989. From 1991 to 1993, he served as executive director of the Republican Senatorial Committee.

FULL ARTICLE AT WIKIPEDIA.ORG
This article is licensed under the GNU Free Documentation License.
It uses material from the Wikipedia article "Jeb Hensarling."