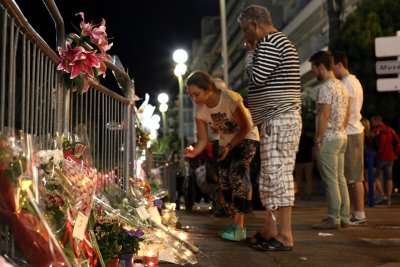 Top News // 3 months ago
The Almanac
On July 14, 2016, 86 people celebrating Bastille Day in Nice, France, were killed when a truck drove into a crowd.

Jean-Paul Marat (24 May 1743 – 13 July 1793) was a Prussian-born physician, political theorist, and scientist best known for his career in France as a radical journalist and politician during the French Revolution. His journalism was renowned for its fiery character and uncompromising stance toward "enemies of the revolution" and basic reforms for the poorest members of society. Marat was one of the more extreme voices of the French Revolution, and he became a vigorous defender of the sans-culottes; he broadcast his views through impassioned public speaking, essay writing, and newspaper journalism, which carried his message throughout France. Marat's radical denunciations of counter-revolutionaries supported much of the violence that occurred during the wartime phases of the French Revolution. His constant persecution of "enemies of the people," consistent condemnatory message, and uncanny prophetic powers brought him the trust of the populace and made him their unofficial link to the radical Jacobin group that came to power in June 1793. For the two months leading up to the downfall of the Girondin faction in June, he was one of the three most important men in France, alongside Georges Danton and Maximilien Robespierre. He was murdered in his bathtub by Charlotte Corday.

Jean-Paul Marat was born in Boudry in the Prussian principality of Neuchâtel, now part of Switzerland, on 24 May 1743. He was the second of nine children born to Jean Mara (Giovanni Mara), a native of Cagliari, Sardinia, and Louise Cabrol, a French Huguenot from Castres. His father was a Mercedarian "commendator" and religious refugee who converted to Calvinism in Geneva. At the age of sixteen, Marat left home and set off in search of fame and fortune, aware of the limited opportunities for outsiders. His highly educated father had been turned down for several secondary teaching posts. His first post was as a private tutor to the wealthy Nairac family in Bordeaux. After two years there he moved on to Paris where he studied medicine without gaining any formal qualifications. Moving to London around 1765, for fear of being "drawn into dissipation", he set himself up informally as a doctor, befriended the Royal Academician artist Angelika Kauffmann, and began to mix with Italian artists and architects in the coffee houses around Soho. Highly ambitious, but without patronage or qualifications, he set about imposing himself into the intellectual scene with essays on philosophy ("A philosophical Essay on Man", published 1773) and political theory ("Chains of Slavery", published 1774). Voltaire's sharp critique in defense of his friend Helvétius brought the young Marat to wider attention for the first time and reinforced his growing sense of the wide division between the materialists, grouped around Voltaire on one hand, and their opponents, grouped around Rousseau on the other.

Around 1770, Marat moved to Newcastle upon Tyne, possibly gaining employment as a veterinarian. His first political work Chains of Slavery, inspired by the activities of the MP and Mayor John Wilkes, was most probably compiled in the central library here. By Marat's own colourful account, he lived on black coffee for three months, during its composition, sleeping only two hours a night – and then slept soundly for thirteen days in a row. He gave it the subtitle, "A work in which the clandestine and villainous attempts of Princes to ruin Liberty are pointed out, and the dreadful scenes of Despotism disclosed". It earned him honorary membership of the patriotic societies of Berwick, Carlisle and Newcastle. The Newcastle Literary and Philosophical Society Library possesses a copy, and Tyne and Wear Archives Service holds three presented to the various Newcastle guilds.

FULL ARTICLE AT WIKIPEDIA.ORG
This article is licensed under the GNU Free Documentation License.
It uses material from the Wikipedia article "Jean Paul Marat."
Back to Article
/