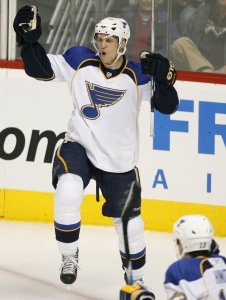 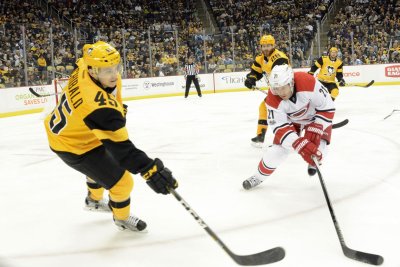 NHL // 3 years ago
Conor Sheary, Pittsburgh Penguins fend off Carolina Hurricanes
PITTSBURGH -- The Penguins' power play hadn't exactly been living up to that description lately, but Pittsburgh scored on both of its man-advantage chances Sunday en route to a 3-2 win over the Carolina Hurricanes at PPG Paints Arena.

NHL // 3 years ago
NHL roundup: recap, scores, notes for every game played on March 1
CHICAGO -- Patrick Kane registered his second hat trick in a week, and Scott Darling made 36 saves as the Chicago Blackhawks beat the Pittsburgh Penguins 4-1 on Wednesday night to win the 10th time in 11 games.

Jay McClement (born March 2, 1983) is a Canadian ice hockey player. He currently plays for the St. Louis Blues. McClement was drafted by the Blues in the 2nd round, 57th overall at the June 23, 2001 NHL Entry Draft.

He was a member of the 2007 Canadian IIHF World Championship team that won gold in a 4–2 win against Finland in Moscow.

He owns a cottage on Howe Island on the St. Lawrence River where he spends the summer. On October 30, 2010 Jay scored his first hat trick on the comeback victory against the Atlanta Thrashers.

FULL ARTICLE AT WIKIPEDIA.ORG
This article is licensed under the GNU Free Documentation License.
It uses material from the Wikipedia article "Jay McClement."
Back to Article
/