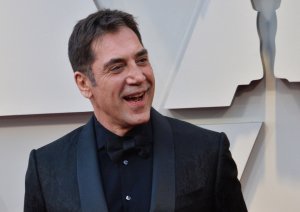 It's an honor to receive this nomination, which is undoubtedly the recognition of the work and talent of all those creative and professional people from my trade, that have inspired and improved me during all these years

Bardem has been awarded an Academy Award, a Golden Globe, a Screen Actors Guild Award, a BAFTA, four Goya awards, two European Film Awards, a Prize for Best Actor at Cannes and two Coppa Volpis at Venice for his work. He is the first Spaniard to be nominated for an Oscar (Best Actor, 2000, for Before Night Falls, lost to Russell Crowe for Gladiator), as well as the first Spanish actor to win an Oscar (Supporting Actor, 2007, for No Country for Old Men). He received his third Academy Award nomination, and second Best Actor nomination, for the film Biutiful.

Bardem was born in Las Palmas de Gran Canaria in the Canary Islands (Spain). His mother, Pilar Bardem, is an actress, and his father, Carlos Encinas, was a businessman who was involved in environmental work; the two separated shortly after his birth. His mother raised him alone. Bardem comes from a long line of filmmakers and actors who have been working since the earliest days of Spanish cinema; he is the grandson of actors Rafael Bardem and Matilde Muñoz Sampedro, and the nephew of screenwriter and director Juan Antonio Bardem. Both his older brother and sister, Carlos and Mónica Bardem, are actors. Bardem was raised Roman Catholic by his grandmother. His uncle Juan Antonio was imprisoned by Franco for his anti-fascist films. "I come from a very political background," says Bardem, who as a child hung around theatres and film sets.

FULL ARTICLE AT WIKIPEDIA.ORG
This article is licensed under the GNU Free Documentation License.
It uses material from the Wikipedia article "Javier Bardem."
Back to Article
/