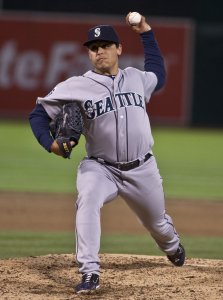 MLB // 3 years ago
Mets-Marlins try to dodge raindrops, play two
NEW YORK -- The New York Mets and Miami Marlins are going to try again Thursday to play a doubleheader. It's hard to imagine the two games going much better for the Mets -- or much worse for the Marlins -- than their single game went Wednesday.

MLB // 3 years ago
Hill, Dodgers aim to down Mets
LOS ANGELES -- Rich Hill might be inspired to get out some aggressions Tuesday and the Los Angeles Dodgers left-hander could unleash his venom on the New York Mets.

MLB // 3 years ago
Chicago Cubs, New York Mets will finish one and play another
The Chicago Cubs will enter Wednesday having won six straight games and in position to maintain their current lead in the National League Central.

It's been a rough first half, and eventually things like that are going to happen when people are frustrated

Oil prices tumble, benchmark under $100 for first time since May

Vargas was drafted by Major League Baseball's Minnesota Twins with the 1,273rd pick in the 2001 Major League Baseball Draft. Jason declined and decided to go to Louisiana State University. As a freshman at LSU, Vargas went 1-1 with a 3.43 ERA in 13 games. However, Vargas decided to transfer out of LSU after the 2001 season to Cypress College for the 2003 season, picking a junior college so he would still be eligible for the draft. He was the Southern California junior college player of the year for his work on the mound and at the plate. However, as the season wore on, his arm slot dropped; and his velocity fell into the mid-80s. That, combined with Vargas' signing bonus demands, depressed his draft stock, so he went undrafted.

Vargas headed to Long Beach State for his senior year. He liked the school's history of producing major league talent and liked the school's hard-nosed mentality even more, especially after getting a recommendation from J.J. Newkirk, who played for Vargas's father, Joe, at Victor Valley High School. Vargas arrived at LBSU with a new work ethic determined to improve upon his year at Cypress College. Vargas also proved a fast learner. At Long Beach, he learned to keep his top half aligned with his lower half over the rubber and not drift toward the plate as he twisted through his delivery. The tweak allowed Vargas to repeat his mechanics and keep his arm higher, which in turn increased the velocity on his fastball and improved the break on his curveball. The new work ethic paid off, and in 2004 Vargas went 7-6 with a 4.14 ERA in 18 games on the mound, while hitting .354 with 14 doubles and five home runs as the team's designated hitter.

FULL ARTICLE AT WIKIPEDIA.ORG
This article is licensed under the GNU Free Documentation License.
It uses material from the Wikipedia article "Jason Vargas."