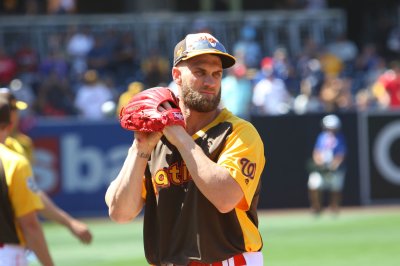 MLB // 4 years ago
87th All-Star Game preview
SAN DIEGO - National League manager Terry Collins watched from the dugout as Johnny Cueto dominated in the 2015 World Series. On Tuesday, he hands the ball to Cueto as the starting pitcher against the American League in the 87th Major League Baseball All-Star Game at Petco Park.

Jason David Schmidt (born January 29, 1973, in Lewiston, Idaho) is a Major League Baseball pitcher for the Los Angeles Dodgers. On December 6, 2006, he signed with the Dodgers, and received a three-year, $47 million contract.

Schmidt attended Kelso High School in the state of Washington, where he played football and basketball in addition to baseball. In 1991 as a senior he tossed a no-hitter, striking out 20 of 21 batters he faced. He was named Washington's Gatorade State Player of the Year and All-State MVP in baseball. He was offered a scholarship to the University of Arizona but chose to sign with the Atlanta Braves after they drafted him in the 8th round of the 1991 MLB Draft.

FULL ARTICLE AT WIKIPEDIA.ORG
This article is licensed under the GNU Free Documentation License.
It uses material from the Wikipedia article "Jason Schmidt."
Back to Article
/