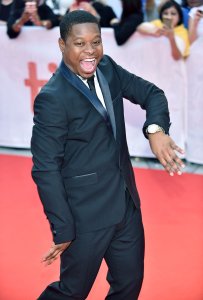 Entertainment News // 3 years ago
Jason Mitchell loses 'The Chi,' Netflix film after misconduct claims
Jason Mitchell was dropped from "The Chi," "Desperados," his agency and his management team following allegations of inappropriate behavior.

TV // 3 years ago
Showtime orders Season 3 of 'The Chi'
Showtime has renewed its Chicago drama "The Chi" for a third season.

TV // 4 years ago
'The Chi' gets a second season on Showtime
Showtime says it has renewed its Chicago-set, coming-of-age story "The Chi" for a second season.

TV // 4 years ago
Common's 'The Chi' drama to debut on Showtime Jan. 7
Showtime has set a Jan. 7 premiere date for "The Chi," a new drama executive produced by rapper and actor Common.

Four years ago I would just be a 'political activist,

Jason Mitchell (born July 19, 1981) is a wide receiver who is currently under contract to the Saskatchewan Roughriders.

Previously, he was with the Jacksonville Jaguars organization.

Signed a contract with the Saskatchewan Roughriders of the CFL in 2007 and was released from the team on July 6, 2007. He has subsequently rejoined the Roughriders, as a member of their Developmental Squad, on July 12, 2007. He was moved to the active roster on July 27, 2007 and saw his CFL debut on July 28, 2007 against the Edmonton Eskimos. He caught one pass for seven yards in his debut with the Riders. He was subsequently released by the Riders on July 31, 2007. On January 23, 2008, he was signed to a one-year plus an option year contract with the Riders.

FULL ARTICLE AT WIKIPEDIA.ORG
This article is licensed under the GNU Free Documentation License.
It uses material from the Wikipedia article "Jason Mitchell."