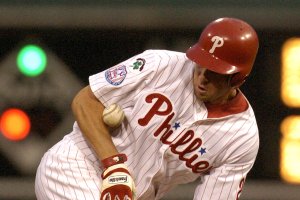 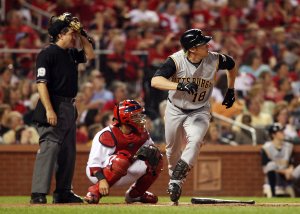 Jason Drew Michaels (born May 4, 1976 in Tampa, Florida), nicknamed "J-Mike", is a Major League Baseball outfielder for the Houston Astros. He is a 1994 graduate of Jesuit High School of Tampa and received an Associate of Arts (AA) degree from Okaloosa-Walton Community College in 1996. He went on to star in baseball at the University of Miami in 1997 and 1998 and signed with the Philadelphia Phillies after they selected him in the fourth round of the 1998 Major League Baseball Draft. After eight years in the Phillies organization, including five seasons in Philadelphia, he was traded to the Cleveland Indians in January 2006. His tenure with the Phillies was marred by his July 2005 arrest for assaulting a Philadelphia police officer for which he was ordered to perform 100 hours of community service and was placed on six months probation.

Michaels attended Jesuit High School of Tampa which also produced major leaguers Lou Piniella, Dave Magadan and Brad Radke. He hit over .400 in each of three years for Jesuit. After high school graduation, Michaels was selected in the 49th round of the June 1994 amateur draft by San Diego. He chose not to sign with the Padres and instead attended Okaloosa-Walton Community College in Niceville, Florida where he hit .421 with 9 home runs and 45 RBI and was named Panhandle Conference Player of the Year in 1996.

FULL ARTICLE AT WIKIPEDIA.ORG
This article is licensed under the GNU Free Documentation License.
It uses material from the Wikipedia article "Jason Michaels."
Back to Article
/