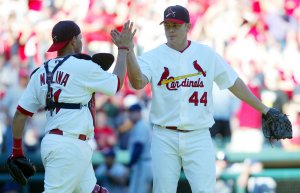 Isringhausen was chosen as a draft-and-follow prospect by the New York Mets in the 44th round of the 1991 Major League Baseball Draft. He signed in May 1992.

In the mid-1990s, Isringhausen, along with pitchers Bill Pulsipher and Paul Wilson were all widely hyped as the next generation of New York Mets' superstars, despite all being in the minor leagues. The group received considerable press attention and the nickname "Generation K". However, injuries took their toll and 1995 was the first year that all three started the season healthy.

FULL ARTICLE AT WIKIPEDIA.ORG
This article is licensed under the GNU Free Documentation License.
It uses material from the Wikipedia article "Jason Isringhausen."
Back to Article
/