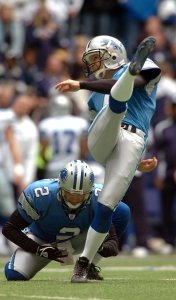 After what happened in Chicago last year, this is a great feeling

The second one was perfect and I pushed it right and on the other two, the combination was not right

Jason Douglas Hanson (born June 17, 1970 in Spokane, Washington) is an American football placekicker for the Detroit Lions of the National Football League.

Hanson attended Mead Senior High School in Spokane, Washington and lettered in football, soccer, track, and basketball. As a senior, he won All-Greater Spokane League honors as both a kicker and punter and was named a first team All-State honoree by the Washington Sportswriters Association.

FULL ARTICLE AT WIKIPEDIA.ORG
This article is licensed under the GNU Free Documentation License.
It uses material from the Wikipedia article "Jason Hanson."
Back to Article
/