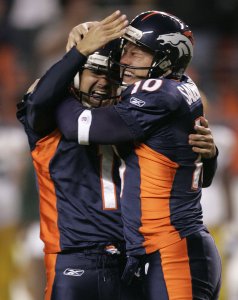 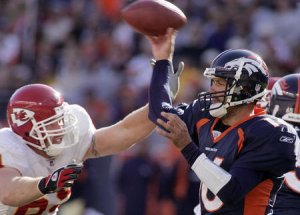 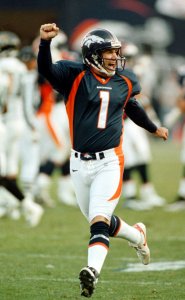 NFL // 3 years ago
Graham Gano's 63-yard boot lifts Panthers past Giants
The New York Giants snapped their streak of 37 consecutive games without scoring 30 points Sunday, but it wasn't enough against the Carolina Panthers.

NFL // 3 years ago
Denver Broncos not perfect in win over Seattle Seahawks
The Denver Broncos' 27-24 win in the season opener on Sunday made for a happy locker room, but there were enough mistakes to show the victory wasn't perfect.

Jason Elam (born March 8, 1970 in Fort Walton Beach, Florida) is an American football placekicker for the Atlanta Falcons of the National Football League. He was originally drafted by the Denver Broncos in the third round of the 1993 NFL Draft. He played college football at Hawaii.

A three-time Pro Bowl selection, Elam won two Super Bowl rings with the Broncos and is tied with Tom Dempsey for the longest field goal in NFL history at 63 yards.

Elam attended Brookwood High School, a powerhouse in Snellville, Georgia, and lettered in football, swimming and track. In football, he was a first-team All-County honoree and a second-team All-State.

FULL ARTICLE AT WIKIPEDIA.ORG
This article is licensed under the GNU Free Documentation License.
It uses material from the Wikipedia article "Jason Elam."