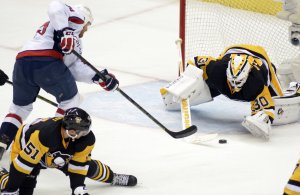 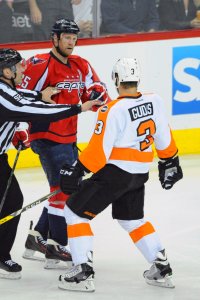 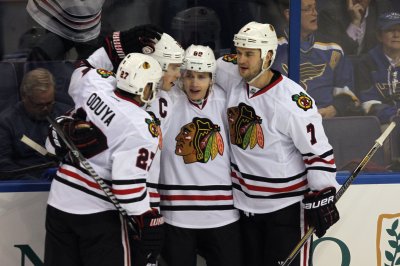 NHL // 4 years ago
NHL roundup: recap, scores, notes for every game played on March 14
WASHINGTON -- Alexander Ovechkin ended a 10-game scoreless drought with a second-period goal and the Washington Capitals halted their four-game losing streak Tuesday night with a 4-2 win over the Minnesota Wild in a battle of conference leaders.

NHL // 4 years ago
New York Islanders beat Carolina Hurricanes on John Tavares' overtime goal
RALEIGH, N.C. -- Interim coach Doug Weight of the New York Islanders made it clear that how the team responded from a lopsided loss would be critical to the rest of the season.

NHL // 4 years ago
NHL roundup: recap, scores, notes for every game played on March 5
PITTSBURGH -- Conor Sheary scored with 2:56 left in regulation as the Pittsburgh Penguins erased a three-goal deficit Sunday for a 4-3 win over the Buffalo Sabres at PPG Paints Arena.

NHL // 4 years ago
Calgary Flames jump out early to beat New York Islanders
CALGARY, Alberta -- The Calgary Flames are hitting their stride at the right time of the season.

NHL // 4 years ago
New York Islanders prep for long trip with win vs. New Jersey Devils
NEW YORK -- As a veteran of 10 NHL seasons and the father of three children, Andrew Ladd grinned Sunday night when he was asked what his New York Islanders teammates could expect when a nine-game road trip -- the longest road trip in franchise history -- begins Tuesday night.

NHL // 4 years ago
NHL roundup: recap, scores, notes for every game played on February 19
BUFFALO, N.Y. -- Patrick Kane had a goal and an assist to help lead the Chicago Blackhawks to a 5-1 win over the Buffalo Sabres. Kane reached 20 goals on the season, making him the first American-born player to ever score 20 or more goals in each of his first 10 seasons, according to STATS, LLC.

Jason Chimera (pronounced /tʃɪˈmærə/; born May 2, 1979) is a Canadian professional ice hockey left winger and an alternate captain for the Washington Capitals of the National Hockey League (NHL).

Chimera played his junior career in the WHL, for Medicine Hat and Brandon. He was selected 121st overall in the 1997 NHL Entry Draft by his hometown team, the Edmonton Oilers, mostly because of his outstanding skating. Chimera played three seasons on the Hamilton Bulldogs, which at that point was the Oilers' farm team in the American Hockey League. In his final season, he was named to the AHL First All-Star team.

Chimera played two seasons for Edmonton before being traded to the Phoenix Coyotes for draft choices. Because of the NHL lockout, he did not play the following season and went to play in Italy for Mastini Varese. Chimera was subsequently dealt to the Columbus Blue Jackets, without playing a game in Phoenix, as part of a trade for Geoff Sanderson.

FULL ARTICLE AT WIKIPEDIA.ORG
This article is licensed under the GNU Free Documentation License.
It uses material from the Wikipedia article "Jason Chimera."
Back to Article
/