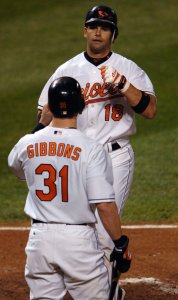 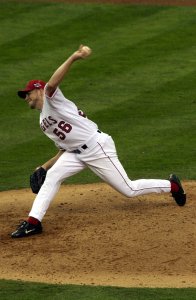 Getting to start Game 1 of the World Series, it's a dream come true

Washburn attended the University of Wisconsin-Oshkosh. He won the championship game of the 1994 NCAA Division III World Series, against Wesleyan University (Conn.)

Washburn was drafted by the California Angels in the 2nd round of the 1995 Major League Baseball Draft. Washburn began his professional career pitching for the Low Single-A Boise Hawks and Cedar Rapids Kernels in 1995. In 1996, he began pitching for High Single-A Lake Elsinore, was promoted mid-season to Double-A Midland, and promoted late-season to Triple-A Vancouver. Washburn began 1997 back in Double-A and was playing for Triple-A Vancouver in 1998 when he was called up and made his major league debut on June 2. After dividing his time between the Angels and Triple-A Edmonton in 1999, Washburn was called up for good in 2001; he started 30 games and went 11-10 with an ERA of 3.77 establishing himself as a major league starter.

FULL ARTICLE AT WIKIPEDIA.ORG
This article is licensed under the GNU Free Documentation License.
It uses material from the Wikipedia article "Jarrod Washburn."
Back to Article
/