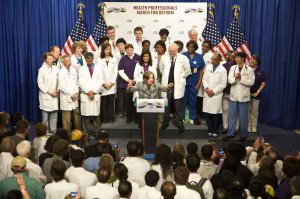 U.S. News // 10 months ago
Senators hope to ramp up COVID-19 testing in nursing homes
Sen. Susan Collins, R-Maine, said at the hearing that she has been recommending universal testing for all residents and employees of nursing homes.

U.S. News // 3 years ago
Trump: 'Together we are building a safe, strong and proud America'
President Donald Trump delivered his first official State of the Union address and touted the growing economy and his administration's push for tax reform.

The charges that were leveled against him are so fantastical, where he was imagining himself being appointed secretary of Health and Human Services or an ambassadorship

I learned a lot just going to the grocery store

President Bush and the Republican leadership in Congress are trying to have it both ways on the assault weapons ban, saying they support the ban but refusing to take any action

Schakowsky was born in 1944 in the city of Chicago of Russian origin,origin and graduated from the University of Illinois. She was Program Director of Illinois Public Action, Illinois' largest public interest group, from 1976 to 1985. She then moved to the Illinois State Council of Senior Citizens as executive director for five years until 1990, when she was elected to the Illinois House of Representatives. She served there for four terms.

Sidney Yates, who had represented the 9th District since 1949 (except for an unsuccessful run for the Senate in 1962), had announced in 1996 that he wouldn't run for re-election in 1998. Schakowsky easily won the Democratic primary, which all but assured her of election in the heavily Democratic 9th. She won in November with 75 percent of the vote and has easily won reelection four times with 70 percent or more of the vote. She is only the third person to represent the district since 1949.

FULL ARTICLE AT WIKIPEDIA.ORG
This article is licensed under the GNU Free Documentation License.
It uses material from the Wikipedia article "Jan Schakowsky."
Back to Article
/