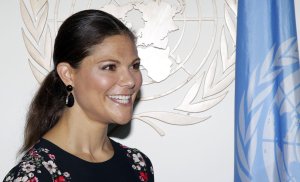 Opinion // 4 years ago
U.N. refugee summit: abstract discussions in face of deadly crisis
World leaders will meet at the U.N. General Assembly on Monday to discuss the large-scale movement of refugees and migrants.
World News // 6 years ago
U.N. panel urges end to death penalty
The world was urged to abolish the death penalty Friday by a United Nations panel, noting the importance of political leadership to end capital punishment.
World News // 7 years ago
Kerry: Ukraine's territorial integrity 'must be restored, respected'
U.S. Secretary of State John Kerry Wednesday urged de-escalation of the crisis in Ukraine as diplomatic talks in Paris failed to resolve the situation.
World News // 7 years ago
UN envoy harassed by armed men, 'not kidnapped,' in Crimea
A group of armed men demanded UN Special Envoy Robert Serry leave Crimea, where he was on a fact-finding mission, immediately. Serry refused, and was unharmed.
World News // 7 years ago
UN deputy secretary-general meets with Ukrainian president
Acting Ukrainian President Oleksandr Turchynov met Tuesday with United Nations Deputy Secretary-General Jan Eliasson in Kiev.
World News // 7 years ago
African Union conference opens with call for peace
A call for a peaceful resolution to conflicts in Central African Republic and South Sudan opened the African Union Assembly Thursday in Addis Ababa, Ethiopia.
Special Reports // 7 years ago
Child soldiers a warning sign for possible genocide
The number of child soldiers conscripted into conflict may be a barometer for the potential for genocide, the former chief of U.N. peacekeeping in Rwanda said.
World News // 7 years ago
U.N.: Two peacekeepers killed in attack on base in South Sudan
Two members of the United Nations peacekeeping force in South Sudan were killed in an attack on a base, officials said Friday.
World News // 7 years ago
U.S. to airlift African troops to Central African Republic
Washington will airlift African forces to the Central African Republic to help French troops put down the country's growing bloodshed, a defense spokesman said.
U.S. News // 7 years ago
Jordan elected non-permanent U.N. Security Council member
Jordan Friday was elected a non-permanent member of the U.N. Security Council by members of the General Assembly, the U.N. said.

We have therefore urged all parties to exercise maximum restraint, and create that climate necessary for productive talks

Also due to the fact that many of the villages are being reoccupied by people who do not own that land ... this is like a ticking bomb

That says a lot about the quality of American research, and we realize that we need contact across the world with the United States

Jan Kenneth Glenn Eliasson (born 17 September 1940) is a Swedish diplomat and Social Democratic politician. He was President of the United Nations General Assembly from 2005 to 2006 and Swedish Minister of Foreign Affairs from 24 April 2006 to 6 October 2006. He is currently the United Nations Secretary-General's Special Envoy to Darfur, Sudan.

Jan Eliasson was born in a working-class family in Gothenburg. He was an AFS exchange student in Indiana, United States, from 1957 to 1958 and graduated from the Swedish Naval Academy in 1962. In 1965 he earned a Master's degree in Economics from the University of Gothenburg's School of Business, Economics and Law. He also holds honorary degrees from American University (1994), Gothenburg University (2001) and Uppsala University (2005).

Eliasson has authored and co-authored numerous books and articles and is a frequent lecturer on foreign policy and diplomacy. Since 1988 he has been a visiting lecturer on mediation, conflict resolution and U.N. reform at Uppsala University.

FULL ARTICLE AT WIKIPEDIA.ORG
This article is licensed under the GNU Free Documentation License.
It uses material from the Wikipedia article "Jan Eliasson."
Back to Article
/