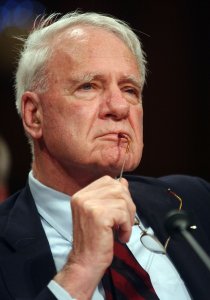 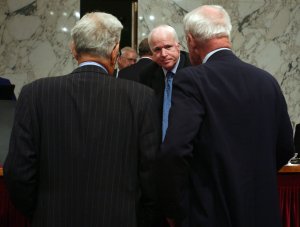 Voices // 1 month ago
Trump could test system again with threat to Iran
Certain indicators suggest that an American pre-emptive military strike against Iran's nuclear programs is still possible, however unlikely.

Commentary: Arnaud de Borchgrave // 5 years ago
Running mates: Bush 41 and 43's biggest mistakes?
Speculation over the consequences of a Powell vice presidency under either Bush 41 or 43 is intriguing. Would the disasters following September 11th been averted or minimized? The latest book by 43 suggests the answer would have been yes.
Top News // 6 years ago
Nixon quits on TV tonight; Ford to take oath Friday
The following is the original article filed by UPI White House correspondent Helen Thomas on August 8, 1974 on the resignation of President Richard Nixon.
Top News // 1 decade ago
Gates, Bodman call for nuclear updates
The United States should replace its current inventory of nuclear warheads in order to maintain its nuclear deterrent capabilities, government officials say.
Special Reports // 1 decade ago
Analysis: U.S. military & Iran -- Part 3
Preparing for a strike against Iran involves far more than just military preparations; it also requires making a case to try and gain public support. And that is likely to be much harder after the release this month of the key judgments from the U.S. National Intelligence Estimate, which said Iran had most probably halted its nuclear weapons program.
Odd News // 1 decade ago
The Almanac
Today is Wednesday, Aug. 24, the 236th day of 2005 with 129 to follow.
Top News // 1 decade ago
U.S. Army clears generals in prison case
The Pentagon has decided not to charge four of the top five commanders of Iraq's Abu Ghraib prison during an abuse scandal there.
Top News // 1 decade ago
U.S. military abuse panel slams government
An independent U.S. panel investigating prisoner abuses at Baghdad's Abu Ghraib prison has criticized every level of command up to the defense secretary.
Top News // 1 decade ago
U.S. meant to seize oil fields in 1973
The United States considered using force to seize oil fields in the Middle East during an oil embargo by Arab states in 1973.
Top News // 1 decade ago
Fix trans-Atlantic rift, group declares
A bipartisan group of 18 former cabinet-level officials from the departments of Defense, State and Treasury, along with officials from the the National Security Council and Congress, released a joint declaration calling for exploration of ways to strength

There was sadism on the night shift at Abu Ghraib, sadism that was certainly not authorized

James Rodney Schlesinger (born February 15, 1929) was United States Secretary of Defense from 1973 to 1975 under presidents Richard Nixon and Gerald Ford. He became America's first Secretary of Energy under Jimmy Carter.

While Secretary of Defense, he opposed amnesty for draft dodgers, and pressed for development of more sophisticated nuclear weapon systems. Additionally, his support for the A-10 and the lightweight fighter program (later the F-16) helped ensure that they were carried to completion.

Schlesinger was born in New York City, the son of Rae, a Russian Jewish immigrant, and Julius Schlesinger, an Austrian Jew. He was educated at Horace Mann School and Harvard University, where he earned a B.A. (1950), M.A. (1952), and Ph.D. (1956) in economics. Between 1955 and 1963 he taught economics at the University of Virginia and in 1960 published The Political Economy of National Security. In 1963 he moved to the Rand Corporation, where he worked until 1969, in the later years as director of strategic studies.

FULL ARTICLE AT WIKIPEDIA.ORG
This article is licensed under the GNU Free Documentation License.
It uses material from the Wikipedia article "James Schlesinger."
Back to Article
/