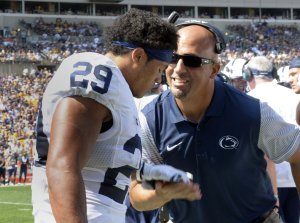 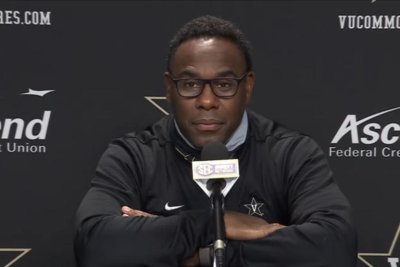 Sports News // 2 months ago
Penn State RB Journey Brown, 21, retires due to heart issue
Penn State running back Journey Brown has medically retired from football after he was diagnosed with a heart condition. Brown is 21 years old.

College Football // 2 years ago
No. 9 Penn State welcomes No. 4 Ohio State
The booming fireworks that have rocked Beaver Stadium before each of the last few primetime games will be more fitting than usual on Saturday.

College Football // 2 years ago
No. 13 Penn State Nittany Lions downplay rivalry game with Pitt Panthers
James Franklin and Pat Narduzzi can agree on something. They both think Saturday's in-state clash between Penn State and Pitt is a big game.

College Football // 2 years ago
Trace McSorley, No. 10 Penn State Nittany Lions face Appalachian St.
The expectations are high again in Happy Valley as James Franklin enters his fifth season at Penn State, even with some of the big names from last season gone.

James Edward Charles Franklin (born November 7, 1980 in Wellington) is a New Zealand cricketer. He is a left-arm fast bowler who can swing the ball and also a capable left-handed lower order batsman. He is one of only two New Zealanders to ever take a hat-trick in Test cricket (the other being Peter Petherick). He achieved this feat on 20 October 2004 against Bangladesh.

Franklin played his first game of International Cricket in an ODI in early 2001 aged just 20 due to an injury crisis with New Zealand bowlers. He played his Test debut in Auckland against Pakistan later in the year and scored a pair. With the ball he took the wickets of Mushtaq Ahmed and Mohammad Yousuf.

He was the Man of the Match in a game in the NatWest Series against England with 5 for 42 at Durham. He then took part in a Test series against Bangladesh in 2004–05 and helped New Zealand to victory with 5/28 in the 1st Test. He then took a career best 6 for 119 in the 3rd Test of Australia's tour of New Zealand in March 2005. Bowling figures of 5/53 came against the West Indies at Wellington later in the year. In 2006 he played for Glamorgan in County Cricket.

FULL ARTICLE AT WIKIPEDIA.ORG
This article is licensed under the GNU Free Documentation License.
It uses material from the Wikipedia article "James Franklin."
Back to Article
/