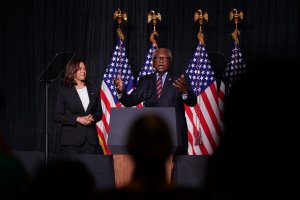 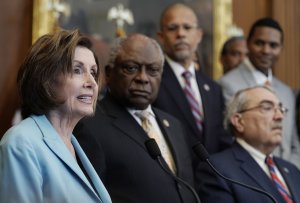 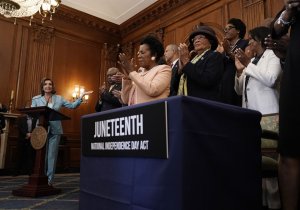 U.S. News // 3 months ago
Watchdog says fear at health agencies allowed Trump officials to interfere in COVID-19 matters
The head of a government watchdog appeared in Congress Friday to expand on a report and answer questions about accusations that former President Donald Trump's administration interfered in the COVID-19 response in 2020.

U.S. News // 4 months ago
Democrats call on Biden to continue student loan pause
A group of Democratic lawmakers on Thursday called on President Joe Biden to again extend the pause on federal student loan payments and consider a cancellation of student debt.

I do know that members are very, very concerned about whether this deal will get us to where we would like to go

We're very poised in our campaign. We believe we'll have a strong showing come November

James Enos "Jim" Clyburn (born July 21, 1940) is the U.S. Representative for South Carolina's 6th congressional district, serving since 1993, and the Assistant Democratic Leader since 2011. He was previously House Majority Whip, serving in that post from 2007 to 2011. He is a member of the Democratic Party. The district includes Florence, Sumter and large portions of Columbia and Charleston.

As Assistant Democratic Leader, he is the third-ranking Democrat in the House behind House Minority Leader Nancy Pelosi and Minority Whip Steny Hoyer.

Clyburn was born in Sumter, South Carolina, the son of Enos Lloyd Clyburn, a fundamentalist minister, and his wife Almeta (née Dizzley), a beautician. Republican South Carolina Congressman George W. Murray, who served in the 53rd and 54th U.S. Congresses, was a distant relative of his. He attended South Carolina State College (now South Carolina State University) in Orangeburg where he was initiated into Omega Psi Phi fraternity and graduated with a bachelor's degree in history.

FULL ARTICLE AT WIKIPEDIA.ORG
This article is licensed under the GNU Free Documentation License.
It uses material from the Wikipedia article "James Clyburn."