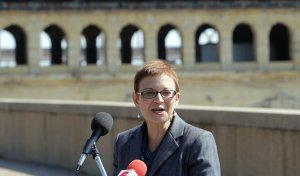 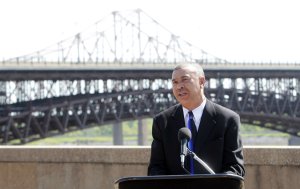 Buchanan (often called Buck-anan by his contemporaries) was a popular and experienced state politician and a successful attorney before his presidency. He represented Pennsylvania in the U.S. House of Representatives and later the Senate, and served as Minister to Russia under President Andrew Jackson. He also was Secretary of State under President James K. Polk. After turning down an offer for an appointment to the Supreme Court, President Franklin Pierce appointed him Minister to the United Kingdom, in which capacity he helped draft the controversial Ostend Manifesto.

After unsuccessfully seeking the Democratic presidential nomination in 1844, 1848, and 1852, "Old Buck" was nominated in the 1856 election. Throughout most of Franklin Pierce's term he was stationed in London as a Minister to the Court of St. James's and therefore was not caught up in the crossfire of sectional politics that dominated the country. Buchanan was viewed by many as a compromise between the two sides of the slavery question. His subsequent election victory took place in a three-man race with John C. Frémont and Millard Fillmore. As President, he was often called a "doughface", a Northerner with Southern sympathies, who battled with Stephen A. Douglas for the control of the Democratic Party. Buchanan's efforts to maintain peace between the North and the South alienated both sides, and the Southern states declared their secession in the prologue to the American Civil War. Buchanan's view of record was that secession was illegal, but that going to war to stop it was also illegal. Buchanan, first and foremost an attorney, was noted for his mantra, "I acknowledge no master but the law."

FULL ARTICLE AT WIKIPEDIA.ORG
This article is licensed under the GNU Free Documentation License.
It uses material from the Wikipedia article "James Buchanan."
Back to Article
/