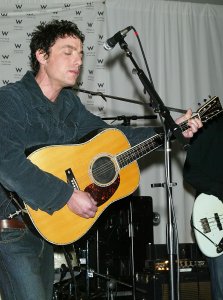 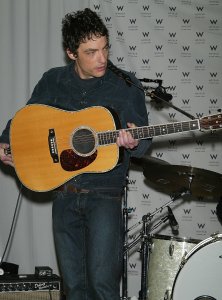 It's all very 'Top Gun' probably minus the intense volleyball scene. The band is thrilled to be a part of this show, but ... we are not promoting any political agenda whatsoever in accepting the invitation ... No matter which side of the fence you're sitting on as we get closer to the November election, I think we're all on the same side when it comes to supporting the troops. Off we go

It's a different time now, and we do what we do

Jakob Luke Dylan (born December 9, 1969 in New York City) is the lead singer and songwriter of the rock band The Wallflowers and is a son of legendary folk singer Bob Dylan. He has also recorded two solo albums.

Dylan is the youngest of four children born to singer-songwriter Bob Dylan and ex-wife Sara Dylan. He married his childhood sweetheart, Nicole Paige Denny (now former actress Paige Dylan), in a ceremony at Sara Dylan's house in 1992. Dylan and his family reside in Los Angeles; they have four sons. Jakob is very private about his personal life and has never revealed his childrens' names in an interview or released pictures of them.

The Wallflowers started out playing alongside other aspiring rockers at Canter's delicatessen in the Fairfax District of Los Angeles in 1989. The band signed to Virgin Records and made a self-titled album, the cover of which had a picture of all the band members' feet, and drummer Peter Yanowitz's dog.

FULL ARTICLE AT WIKIPEDIA.ORG
This article is licensed under the GNU Free Documentation License.
It uses material from the Wikipedia article "Jakob Dylan."
Back to Article
/