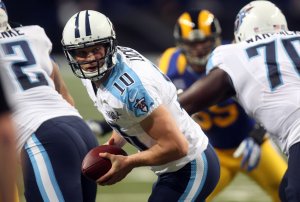 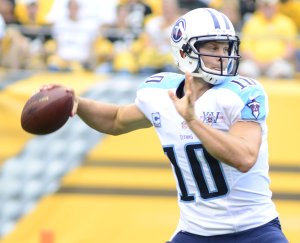 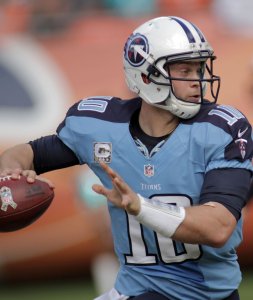 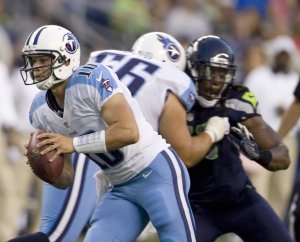 Sports News // 5 years ago
Extra Points: Desperate Tennessee Titans ignore the suitors
Let's just say the quarterback position has been a problem in Nashville since the late Steve McNair left for Baltimore in 2006.

Sports News // 6 years ago
Tennessee Titans and Jacksonville Jaguars close out Thursday night package
There is no flex scheduling on Thursday nights, meaning the NFL Network's television vehicle will not exactly be going out with a bang this season.

Jacob Cooper "Jake" Locker (born June 15, 1988) is an American football quarterback for the Tennessee Titans of the National Football League. He played his college football for the University of Washington Huskies.

In 2005, he led Ferndale High School (Washington) to a 14–0 record and a state title, throwing for 1,603 yards and 25 touchdown passes for the season with only 3 interceptions. Locker was an excellent running quarterback, as he also rushed for 1,339 yards and 24 touchdowns during his senior year. Locker earned First-team All-America honors from Parade. He was also named the 3A state player of the year by the AP and Seattle Times, and earned First-team All-state honors from both organizations. In the 2005 Washington 3A state title game, Locker had four touchdowns and 272 total yards in a 47–12 win over Prosser High School.

He helped Ferndale to a No. 7 ranking in USA Today's final West Region rankings, and a No. 12 ranking in MaxPreps.com's final national rankings. He was one of four Seattle Times "Blue Chip" recruits, ranked No. 5 nationally at QB, and No. 1 in the West, by PrepStar. Locker also ranked 85th in Scout.com's National "Hot 100" and ranked 68th overall and fourth among "dual-threat" quarterbacks in Rivals.com's national rankings. As a junior, he threw for 1,314 yards and 16 TDs and rushed for 987 yards and 15 TDs. Locker led Ferndale to a 13–2 record and a Washington 3A state runner-up finish in 2004, and was selected First-team All-state by the AP. As a sophomore, he threw for 713 yards with nine TDs, while running for 478 yards and three scores. In addition to quarterback, Locker played four years as a defensive back at Ferndale and was the first freshman ever to start in coach Vic Randall's 21-year career. Locker was also a standout baseball pitcher and outfielder.

FULL ARTICLE AT WIKIPEDIA.ORG
This article is licensed under the GNU Free Documentation License.
It uses material from the Wikipedia article "Jake Locker."
Back to Article
/