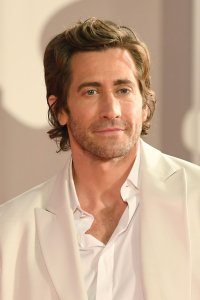 Movies // 5 months ago
Antoine Fuqua inks new deal with Netflix
Antoine Fuqua has signed a deal to make movies and documentaries for Netflix.

Movies // 8 months ago
'The Guilty' trailer: Jake Gyllenhaal tries to save 911 caller
"The Guilty," a new thriller starring Jake Gyllenhaal, Ethan Hawke and Riley Keough, will premiere on Netflix in October.

Gyllenhaal and Sarsgaard marry in Italy May 04, 2009

Don't get 'Ella Enchanted' pissed off, and I'm not obedient

People have very often told me that I look like Tobey, so I thought that was a perfect casting thing that Jim put us together

Jill is one of those people who, unfortunately, didn't have as much time as some ... . She was just amazing

Jacob Benjamin "Jake" Gyllenhaal (pronounced /ˈdʒɪlənhɑːl/ JILL-ən-hahl; born December 19, 1980) is an American actor. The son of director Stephen Gyllenhaal and screenwriter Naomi Foner, Gyllenhaal began acting at age ten. He has appeared in diverse roles since his first lead role in 1999's October Sky, followed by the 2001 indie cult hit Donnie Darko, in which he played a psychologically troubled teen and onscreen brother to his real-life sister, actress Maggie Gyllenhaal. In the 2004 science-fiction film The Day After Tomorrow he portrayed a student caught in a cataclysmic global cooling event, alongside Dennis Quaid as his father. He then played against type as a frustrated Marine in Jarhead (2005). The same year, he garnered critical acclaim and an Academy Award for Best Supporting Actor nomination as Jack Twist in the film Brokeback Mountain opposite Heath Ledger.

Gyllenhaal has promoted various political and social causes. He appeared in Rock the Vote advertising, campaigned for the Democratic Party in the 2004 election, promoted environmental causes, and campaigned on behalf of the American Civil Liberties Union.

Gyllenhaal was born in Los Angeles, California, the son of film director Stephen Gyllenhaal and film producer and screenwriter Naomi Foner (née Achs). Maggie Gyllenhaal, his sister and also an actress, appeared with Jake in the movie Donnie Darko. Gyllenhaal's father was raised in the Swedenborgian religion and is a descendant of the Swedish noble Gyllenhaal family. His last native Swedish ancestor was his great-great-grandfather, Anders Leonard Gyllenhaal. Jake Gyllenhaal's mother is from a Jewish family from New York City, and Gyllenhaal has said that he considers himself "more Jewish than anything else." On his thirteenth birthday, Gyllenhaal performed a "barmitzvah-like act, without the typical trappings", volunteering at a homeless shelter, because his parents wanted to instill in him a sense of gratitude for his privileged lifestyle. His parents insisted that he have summer jobs to support himself, and he thus worked as a lifeguard and as a busboy at a restaurant operated by a family friend.

FULL ARTICLE AT WIKIPEDIA.ORG
This article is licensed under the GNU Free Documentation License.
It uses material from the Wikipedia article "Jake Gyllenhaal."