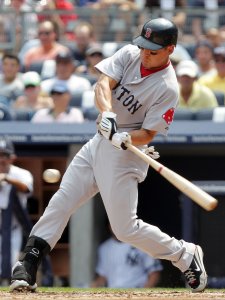 MLB // 1 year ago
Severino, Yankees visit rival Red Sox
BOSTON -- It's no secret that the New York Yankees need Luis Severino if they are going to make any real noise down the stretch and into the postseason.

MLB // 2 years ago
ALCS: Dallas Keuchel pitches Astros to Game 1 win over Yankees
Dallas Keuchel was again left lacking for an explanation for his brilliance against the team in pinstripes with 27 World Series trophies back in the Bronx.

MLB // 2 years ago
Yan Gomes, Cleveland Indians comeback vs. New York Yankees
CLEVELAND -- It was wild, it was crazy, and it was long. It was especially long.

MLB // 2 years ago
New York Yankees fail to gain ground after losing to Tampa Bay Rays
NEW YORK -- Wilson Ramos highlighted a seven-run top of the fifth inning Thursday with a go-ahead two-run homer, lifting the Tampa Bay Rays to a 9-6 victory over the New York Yankees, who are on the verge of elimination from the American League East title race.

Jacoby McCabe Ellsbury (first name pronounced /dʒəˈkoʊbi/ jə-koh-bee); born September 11, 1983) is an American professional baseball center fielder with the Boston Red Sox of Major League Baseball. Ellsbury attended Madras High School where he was a 4-year letterman in football and baseball, and played varsity basketball his sophomore through senior year. Ellsbury's career batting average of .567 and being caught stealing only once are Oregon High School State Records. He also holds the Oregon record for stolen bases in a game with 7. Ellsbury was first drafted by the Tampa Bay Devil Rays in the 23rd round of the 2002 MLB Draft but did not sign. He was then drafted 23rd overall by Boston in 2005, after three years at Oregon State University.

Ellsbury is officially enrolled as a member of the Colorado River Indian Tribes and is the first Native American of Navajo descent to reach the Major Leagues. As of 2008, he was one of only three active non-Hispanic Native American players in Major League Baseball, along with Kyle Lohse of the St. Louis Cardinals and Joba Chamberlain of the New York Yankees. Ellsbury is English and German on his paternal side.

Ellsbury was born September 11, 1983, in Madras, Oregon, to Jim and Margie Ellsbury, the oldest of four children. Growing up with Little League Baseball, he often played on a team with kids up to three years his senior though he was still the fastest and best player on the team. In high school, Ellsbury lettered in football and baseball for four years and in basketball for three. He hit .681 and had 82 stolen bases his senior year in baseball and averaged 15.6 points per game and had an average of 3.4 blocks per game in basketball. He finished his football career with 12 interceptions and 5 kickoff returns for touchdowns.

FULL ARTICLE AT WIKIPEDIA.ORG
This article is licensed under the GNU Free Documentation License.
It uses material from the Wikipedia article "Jacoby Ellsbury."
Back to Article
/