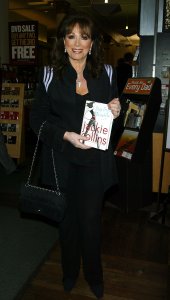 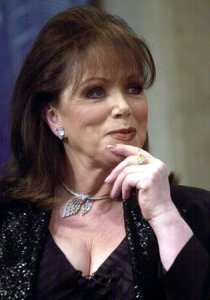 Movies // 2 years ago
Jackie Collins biopic 'Lady Boss' in the works
Passion Pictures is producing a new documentary film about Jackie Collins, a British author known for her romance novels.

Top News // 5 years ago
The Almanac
On Oct. 4, 1927, artist Gutzon Borglum begins sculpting Mount Rushmore. It would take 14 years to complete, with work on the monument finishing in 1941.

It's surprising that Collins and Gibson were married in a night-time ceremony. The groom might not be able to stay out that late

Jacqueline Jill "Jackie" Collins (born 4 October 1937) is an English novelist and former actress. She is the younger sister of actress Joan Collins. To date, she has written 27 novels, all of which have appeared on the New York Times bestsellers list. In total, her books have sold over 400 million copies and have been translated into 40 languages. To date, eight of her novels have been adapted for the screen, either as films or television mini-series.

Collins was born in London in 1937, the younger daughter of Elsa Bessant and Joseph William Collins (died 1988), a theatrical agent whose clients included Shirley Bassey, The Beatles and Tom Jones. Collins' South African-born father was Jewish and her British mother was Anglican. A middle child, Collins has an elder sister, actress Joan Collins (b. 1933) and a younger brother, Bill Collins (b. 1946).

At 15, Collins was expelled from school; after which, she threw her school uniform in the Thames. During this period she had a brief affair with Marlon Brando, who was 29 at the time.

FULL ARTICLE AT WIKIPEDIA.ORG
This article is licensed under the GNU Free Documentation License.
It uses material from the Wikipedia article "Jackie Collins."