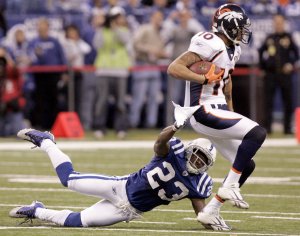 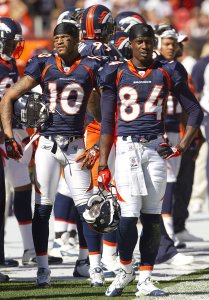 Derrick Jabar Gaffney (born December 1, 1980) is an American football wide receiver for the Washington Redskins of the National Football League (NFL). He was drafted by the Houston Texans in the second round of the 2002 NFL Draft. He played college football at Florida.

Gaffney has also been a member of the Philadelphia Eagles, New England Patriots and Denver Broncos.

Gaffney was born in San Antonio, Texas. He attended William M. Raines High School in Jacksonville, Florida, and was a letterman for the Raines Vikings high school football team. In football, he was a two-year starter as a wide receiver, and as a junior in 1997, he caught the game-winning, fourth quarter touchdown pass in the state championship game.

FULL ARTICLE AT WIKIPEDIA.ORG
This article is licensed under the GNU Free Documentation License.
It uses material from the Wikipedia article "Jabar Gaffney."
Back to Article
/