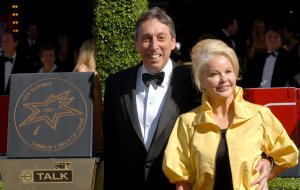 What makes me nostalgic for 'Ghostbusters' is to work with Bill Murray, Dan Aykroyd and Harold Ramis; that was the joy of working on 'Ghostbusters' and 'Ghostbusters II.' They've become old friends. That's what you miss. It's not staging a marshmallow man walking down Columbus Circle; that's a pain in the ass. It's much better getting (the actors) all in a room and doing something funny

This has all the elements of a classic romantic comedy; except it has one sci-fi element and that's that one character has these special powers and that shifts all of the dynamics between the men and the women in the story

Then he realized, once he saw 'The Graduate,' that obviously he had no ability to get a sense of what a movie is going to turn out like from the screenplay

We got turned down by about a dozen different colleges

Ivan Reitman, OC (born October 27, 1946) is an American-based Canadian film producer and director. He is known for the comedies he has directed and produced, especially in the 1980s and 1990s.

Reitman was born in Komárno, Slovakia, the son of Klara and Leslie Reitman. Reitman's parents were Hungarian-Jewish; his mother survived the Auschwitz concentration camp and his father was an underground resistance fighter. His family emigrated to Canada in 1951. Reitman attended Oakwood Collegiate in Toronto and was a member of the Twintone Four singing group.

Reitman's first producing job was with the then-brand new station CITY-TV in Toronto. CITY was also the home of the first announcing job of his later friend and collaborator Dan Aykroyd. However, Reitman's tenure at CITY was short and he was fired during his first year by station owner Moses Znaimer.

FULL ARTICLE AT WIKIPEDIA.ORG
This article is licensed under the GNU Free Documentation License.
It uses material from the Wikipedia article "Ivan Reitman."
Back to Article
/