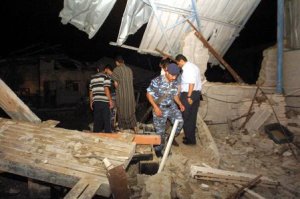 World News // 4 years ago
Israel arrests 22 in suspicious fires, classifies them 'terrorism'
Nearly two dozen people have been arrested on suspicion of starting fires across Israel this week, which officials on Friday called a form of terrorism.

World News // 6 years ago
Oil spill one of the worst environmental events in Israel's history, official says
An oil spill in southern Israel has released over 600,000 gallons onto the Evrona Nature Reserve after the Trans-Israel pipeline was breached.
World News // 6 years ago
Israel: New airstrike on Gaza a response to rocket barrage
Israel launched its second airstrike on Gaza in two days Wednesday, responding to a barrage of rockets, military officials said.
U.S. News // 7 years ago
Israeli on Kerry anti-Semitic charge: Not 'personal'
An Israeli lawmaker tried to explain Sunday that his characterization of U.S. Secretary of State John Kerry as anti-Semitic was not "personal."
World News // 7 years ago
Rockets fired at Eilat, Negev in Israel
Israeli security forces searched Tuesday for the remains of two rockets fired at the southern city of Eilat, Israel Radio reported.
World News // 7 years ago
Israel, Kazakhstan sign defense pact
Israel and Kazakhstan have signed a security cooperation agreement to improve bilateral defense trade, officials said.

Kol Yisrael was originally an underground Haganah radio station that broadcast from Tel Aviv. It started consistently broadcasting in December 1947 under the name Telem-Shamir-Boaz, and was renamed to Kol HaHagana ("Voice of the Haganah") in March 1948. With Israel's declaration of independence on May 14, 1948, it was transformed into the official station Kol Yisrael. Another station named Kol Yisrael operated in Haifa, and was renamed Kol Tzva HaHagana (Voice of the Defense Force).

The first Kol Yisrael transmission was a live broadcast from Tel Aviv of David Ben-Gurion reading of the declaration of independence. It was operated by a department of the Ministry of the Interior responsible for domestic and international broadcasts. Responsibility for the service was later transferred to the Office of Posts and Telegraphs and then to the Prime Minister's Office.

FULL ARTICLE AT WIKIPEDIA.ORG
This article is licensed under the GNU Free Documentation License.
It uses material from the Wikipedia article "Israel Radio."
Back to Article
/